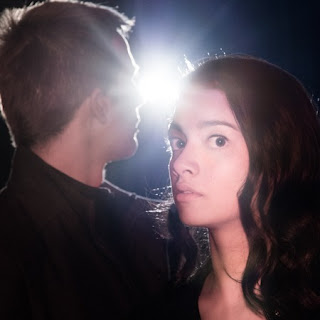 I did a little email interview with Daniel Greenways who is from Night Canopy Theatre who are producing Ahunwar: The Devil's Long Nap at this year's Fringe. Here's what he had to say about the show:
Describe your Fringe show in 10 words or less. Two Zoroastrian demons fight back against their own destinies!

Now the longer description... what else should people know about it?
Ahunwar: The Devil’s Long Nap is a show that takes something mythological and turns it into something human. It takes a story about time and magic and turns it into a story about memory and the unknown. It takes cosmic conflicts and turns them into personal, existential struggles. Ahunwar is set in a mysterious den of darkness, in which a demoness named Jeh awakens Ahriman from a deep, unnatural slumber. As Ahriman recovers his lost memories, he begins to rediscover his past life, but he is not sure he wants to follow the same path again. Things do not go as planned, and the pair start questioning their identities, their freedom, and everything they think they know to be true. Ahunwar is an adaptation of a medieval Zoroastrian myth by local playwright Jonah Dunch, and it’s a pretty wild ride!

What makes Ahunwar: The Devil's Long Nap a great choice for the Fringe?
Going to a Fringe show is an act of faith. Why not make your act of faith about a bunch of acts of faith? More to the point, it touches on some topical topics as well, such as power and control over others, sexual freedom and bad choices, and the differences between the world of the past and the world of the present. Also, going to a Fringe show is a great opportunity to support up-and-coming local artists. Ahunwar captures that Fringe spirit through and through. Our entire cast and crew is made up of young, local artists currently studying at University (in a wide variety of programs). Many of our cast and crew have also been involved in the Citadel’s well-known Young Companies programs.

Okay, you're in rehearsal with an amazing group of people...
Who makes you laugh the most? I think my actors (Braden and Christina) make me laugh the most. I like to work in a space where they feel comfortable following impulses. We had a recording session at one point, and it was a lot of fun when they started playing around with their voices.
Who makes you groan? The cat, Bert. Bert is the resident cat at our rehearsal hall, and he was leaving us alone until LAST REHEARSAL when he decided to run around the set and make everyone laugh. If you want to see Bert, you can catch him in our production playing the uncredited role of the “inaudible cat that is in a room far away”.
Who is most likely to give you a massage? Probably Braden, which is ironic considering the fact that he plays the Zoroastrian devil.

Description: An exciting new adaptation of Zoroastrian mythology! Three thousand years after a cosmic war, a demoness named Jeh awakens the devil Ahriman from a deep, unnatural slumber. As Ahriman recovers his lost memories, the pair start questioning their identities, their freedom, and everything they think they know to be true.
Warnings: Religious Content, Sexual Content, Adult Language
Duration: 60 minutes

Click here for tickets.
Posted by Finster at 8:35 PM