Well, it's been a heck of a build-up for me.  That's what being in and directing two shows will do for you, never mind the myriad of other related tasks, but it's here! Tonight I walked in the parade dressed as the Orange Girl from SHOUT! and handing out materials for both it and DOUBLE DOUBLE! People seemed receptive to both and although the pavement was not kind to my go-go boots, it was a lot of fun.  Then I caught my first Fringe show.  This Fringe will be a little different as I seriously doubt I will hit my usual 20-30 shows due to my own performance schedule.  I am getting what I can in! 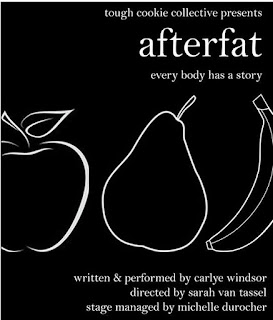 My first show was AfterFat by Carlye Windsor which spoke to body image, particularly with regards to being heavy.  It was an autobiographical journey and was very honest and as a larger than average person with a lot of personal confidence I found a lot I could personally relate to.  Windsor is very charismatic and charming and is best when her natural humour comes through, although my favorite moment was when she told a story about her mother which was a heart-breakingly honest. I think that there is a lot for anyone to hear in this piece.  It's more personal story-telling than theatrical, but even if you've never been heavy chances are you've had some insecurity about your appearance and I think there's common ground for everyone.

I have also taken a bit of time to look through the Program.  Here's a few that have caught my eye:

American Idiot - The Scona Alumni group always do a show that would stand up anywhere in the season, not just for Fringe.

Love Letters - Blarney Productions - Brian Dooley and Holly Turner directed by Wayne Paquette - sounds like a winning formula to me!

No Belles - A story about women scientists?  Well, if you read my posts about Arcadia, you probably understand why this attracts me!

Who Am I? - The latest from Toy Guns - I'm just really interested in seeing what they will do now! Last year was so much fun!

Release the McCrackin - Accidental Humour - So special that it will be our Anniversary Date.  Mark was in the 2nd McCrackin show so we have to see how this all ends up.  Always funny and always really well done.

2 for Tea and High Tea - My sister saw these guys in Toronto and recommended them.

There's more as I have only scratched the surface. I'll be doing the Word of Mouth posts so if you see me around, let me know what you would recommend and I will share it!