This has been a nice Christmas so far. Some sporadic eruptions of fighting between the boys, but not too many and a lot of laughing in between (especially when I do the crazy Mom saying Merry Christmas! It has become the new holiday shtick and I plan to keep it for years to come). Today I tried to take photos of the boys and I think I have 2 good shots out of about 30. Plenty of "goofy" ones. Played Scrabble with Mark last night - he won, but only just barely. Baked cookies with Gibson this morning. Did all my Christmas shopping in about 5-6 hours. Not bad at all!

Anyhow, Merry Christmas!
Posted by Finster at 9:54 AM No comments:

This Past Weekend Was Crazy Busy...

So I expect Christmas to be the opposite. I had many things on the go this weekend and I think I managed to get them all done in a satisfactory way. The weekend followed a very busy week wherein I was at the boy's school for Child Check, 2 field trips (one in-school, one out of school), and 2 Christmas Concerts. The blizzard that hit on Wednesday prevented me from doing what I had planned to do in the daytime on Thursday, but alas, that is what happens. Annie (my sis) came to visit on the weekend and while we dealt with the constantly imprecise schedules of our siblings we managed to work out a pretty good visit. She played Wii with the boys a couple of afternoons/evenings and they were in heaven with that. She and I visited and caught the latest Narnia Movie, The Voyage of the Dawn Treader (not the best book to film adaptation).

Sunday I was at Walterdale for 2 rehearsals - Rabbit Hole in the afternoon and Threepenny in the evening. Around the rehearsals I squeezed in studying for my Drama 208 (Theatre History) Final. I wrote that on Monday morning. I think I did okay. The first half was delightful. I knew it all. I knew the second half too, but my brain was very tired and I do not think I crafted my answers as best as I could have. We shall see. I keep telling myself that I am not doing the course for marks, but I have never been the kind of student who could let things slide so I have a hard time letting go of that. It's done now so that's good.

After the exam I squeezed in a visit with Wanda. It was almost not to be as she was in a wee car accident on the way to lunch, however she managed to get the police report done and her vehicle and self were not injured so she came up to the house and we visited there. So good to see her! I must plan a trip to Calgary to see her for a real visit!

Then Monday night I had my final rehearsal for Rabbit Hole before we break for Christmas. We finished early (always a bonus) and I am resting today doing cards and cleaning a bit. Tomorrow I will attempt the 'shopping'. My list is short and since the crowd expected for Christmas dinner is smaller this year I expect a restful weekend. We do not plan to travel either weekend (that could change) and I really just want to relax and maybe work on my lines...
Posted by Finster at 11:03 AM No comments: 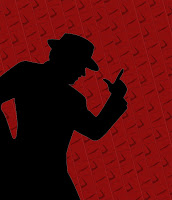 Well, I did something nuts... but after watching The Threepenny Opera auditions and being around the team and and seeing the great people that were coming out, I decided to audition. I had auditioned for another show earlier this Fall that would have been even worse schedule-wise and found that process a wee bit disappointing. I will admit, my ego was a little bruised by the way the auditions and casting played out. I could have been in that show, but something felt off so I declined what I was offered. This result was so much more enjoyable. Yes, partly because I got the part I wanted, but I think I would have been okay even if I hadn't, because the process was so much more transparent and fun. I left the audition and callback feeling like I was seen and given the chance to show what I can do. The atmosphere was fun and the people seemed so great. Anyhow, I am pleased to announce that I will be playing the role of Mrs. Peachum in The Threepenny Opera at Walterdale in April of 2011. I have seen the cast list and it is going to be a lot of fun, and if I survive my schedule it will all be good!
Posted by Finster at 4:33 PM No comments:

Well, I am trying to get back on track health wise and one of the things I am doing is getting to the Dentist after a long hiatus (longer than it should have been). I also have to get in to my doctor for a physical, but that'll be another story. So today I got a check-up and the first half of a cleaning. I have to go back for the other half on Friday. I will also have to get my Wisdom Tooth extracted, a crown on a tooth I chipped 3 months ago and probably another crown and 2 old, old fillings replaced before they fall out. Lots and lots of fun! Of course I am doing this on my University Health Plan so it's all reimbursement and I only get a small percentage back. Sigh. So much for free health care. Well, it is better I deal with it before it gets worse. I just wish I had gotten the wisdom tooth out years ago when I kept asking about it. The Dentist at the time kept saying it wasn't urgent, but back then I was on a better plan... it probably would have cost me less. Well, maybe, I don't know. But alas! Anyhow, I expect a few months of a painful mouth until this priority work is done and then I will rest before getting the other things done.
Posted by Finster at 9:29 PM No comments:

It always comes at precisely the wrong times...

This was a not-so-good weekend. Don't get me wrong, I got a lot accomplished, but I am now very tired and I had to deal with a lot of unanticipated stuff so I am not in a great frame of mind. It started off well. Much Ado About Nothing opened and I thought it was lovely. I had saved the Second Act for Opening Night (I saw the First Act twice before then - but I wanted a surprise) and I was quite happy with the show as a whole. This was amplified by a fabulous review on the SEE Magazine Blog and pretty good attendance for the first weekend. However, there were issues arising with the production and no one was fixing them so I was called in to help. An already busy weekend because much busier. I was set to work Box Office on Friday Night and then scurry off to work the Walterdale Casino right after my shift, but in order to help with the problems on the show I went in early. There were also a flurry of desperate emails and frantic phone calls. It was stressful. Saturday the stress continued. I had worked the casino late the night before but because the boys have Drama on Saturday morning I was unable to sleep in and had to be "fun ol' Mom" when I really wasn't feeling it. The boys didn't seem to notice my exhaustion, so that's good. They did their final presentations and I enjoyed those, then a text message sent me hurtling to the theatre. An Angel of the theatre, Geri, was there helping with the ongoing issue. That made me feel better and she and I devised a plan to deal with any more arising issues. Off to supper with my boys and Mark and then home where I hastily composed more emails to put the plan in place and then to fall exhausted into bed, where I slept for 12 hours straight. I missed a party, but I could not have driven there and I needed that sleep. Sunday rolled around and I headed off to rehearsal for Rabbit Hole and then to the Threepenny Opera auditions. I thought I survived the weekend.

Then today, I check my emails and there is an absolutely foul and insulting email from a member who feels hard done by. I count up all the hours I put in this week and weekend and they certainly do not feel rewarded by the email. I wanted to cry. My stomach is upset. I do not know what I will do when I see this member. I want him to never darken the Walterdale doors again. The worst thing, is that he sent it not only to me, but to two other members. I hope that his rudeness does not alienate these members from returning to Walterdale. He certainly does not represent the whole of our organization. I get so frustrated that I am dealing with 'supposed' adults and they pull this kind of crap. I don't do this for the kudos, but I certainly do not expect to have my time rewarded with insults and harassment.

I know I should think of the many people who cheerfully worked the casino, and the actors onstage giving their all to Shakespeare and the lovely, lovely Geri who came in, and the earnest actors who sang their hearts out at their auditions last night, but it's hard in the face of this.
Posted by Finster at 3:23 PM 2 comments: