In the Haze of Illness, I forgot to reflect on this year's Skirts AFire Festival!

No, it's true.  I was hit with a horrible cold/flu (I never know which - I only know the suffering) in March and totally forgot to write about the Skirts AFire Festival!

The illness was descending when I took in The Mothers in the days before the festival actually started. A one woman show by Nicole Moeller, starring Annette Loiselle and directed by Glenda Stirling, The Mothers explored how the mother of a child gone wrong deals with her guilt, confusion, sadness and anger over the actions of her child. The script raised a lot of interesting things about how little we know about how a dangerous child might be created. We think there must be a straight line from the baby to the teenager with clear indicators and inciting incidents and predictive behaviour, but the truth is a lot more complicated.  Loiselle has many fine moments in the piece which is as times an archaeological examination of the past and at other times an emotional exploration of her perceived failure as a parent.  I was challenged a bit by the arrangement of the script as the build was more up an down, and there were a lot of details about the mother-child relationship that seemed inconsistent.  I wondered if that was deliberate, though, in that a parent might look back and see both good and bad jumbled together and have trouble separating truth from guilt.

Then the illness struck and I was out for over half a week.  However, I dragged myself out of bed and medicated myself so that I could make it to Peep Show, where 4 new plays were given 10-15 minutes of exposure to a first audience.  Peep show is where The Easy Road started 2 years ago which led to the full reading and workshop last year at Skirts AFire 2014.  I was looking forward to hearing the 4 pieces on display this year. We heard scripts from Michele Vance Hehir, Leslea Kroll, Hayley Moorhouse and Anne Marie Szucs.  I enjoyed hearing these four new plays and the new female playwright voices.  So pleased that Skirts AFire has provided the opportunity for more new work development.

I'm looking forward to seeing what is on the docket for next season and hoping that I am not sick so that I can see even more!
Posted by Finster at 11:54 AM No comments:

Okay, for me, pretty much every day of the year could be Theatre Day, being that I work at one, volunteer at several and I watch a heck of a lot of it.  But for those of you who are more moderate in your approach to theatre, today is THE day! Luckily, there are a lot of shows you can see right here in Edmonton this weekend!

Shows that close this weekend: 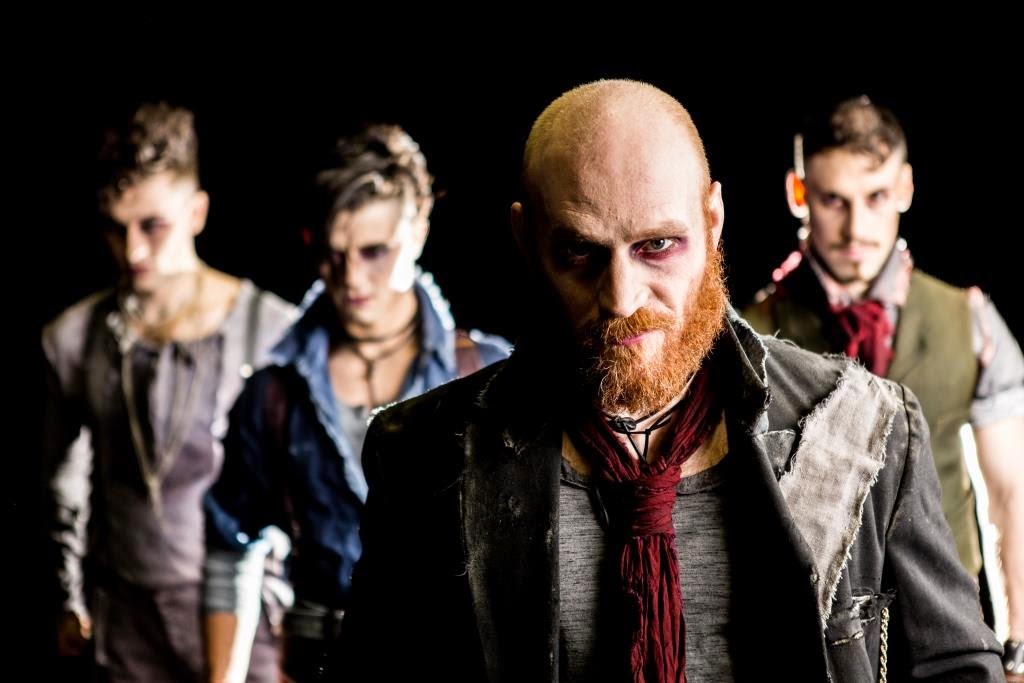 Vigilante at the Citadel Theatre.  This rock opera with an edge is being presented in the Maclab Theatre.  It's a show ideally suited to the thrust theatre space and re-imagines the story of the Black Donnellys, an Irish immigrant family who were brutally murdered.  It's also the latest work from Catalyst Theatre (Nevermore, Frankenstein, Hunchback), and has the same level of excellence in concept and execution, and a very talented 8 person cast who can sing some amazing celtic and rock inspired musical theatre.  We've had people respond so well to it that they've come back and seen the show three times! It only runs until Sunday, March 29th, so I recommend catching it quick.  For those on a budget, there are still a few $30 seats left and because they use the thrust space so well, there really are no bad seats.

First Time Last Time  at Shadow Theatre. A new take on the romantic comedy what turns the premise on it's side as it pairs two commitment shy people who go to outrageous lengths to maintain a non-relationship/ relationship.  I wrote about it more here.  It is at the Varscona Theatre  until Sunday, March 29th.

Shows that opened this week: 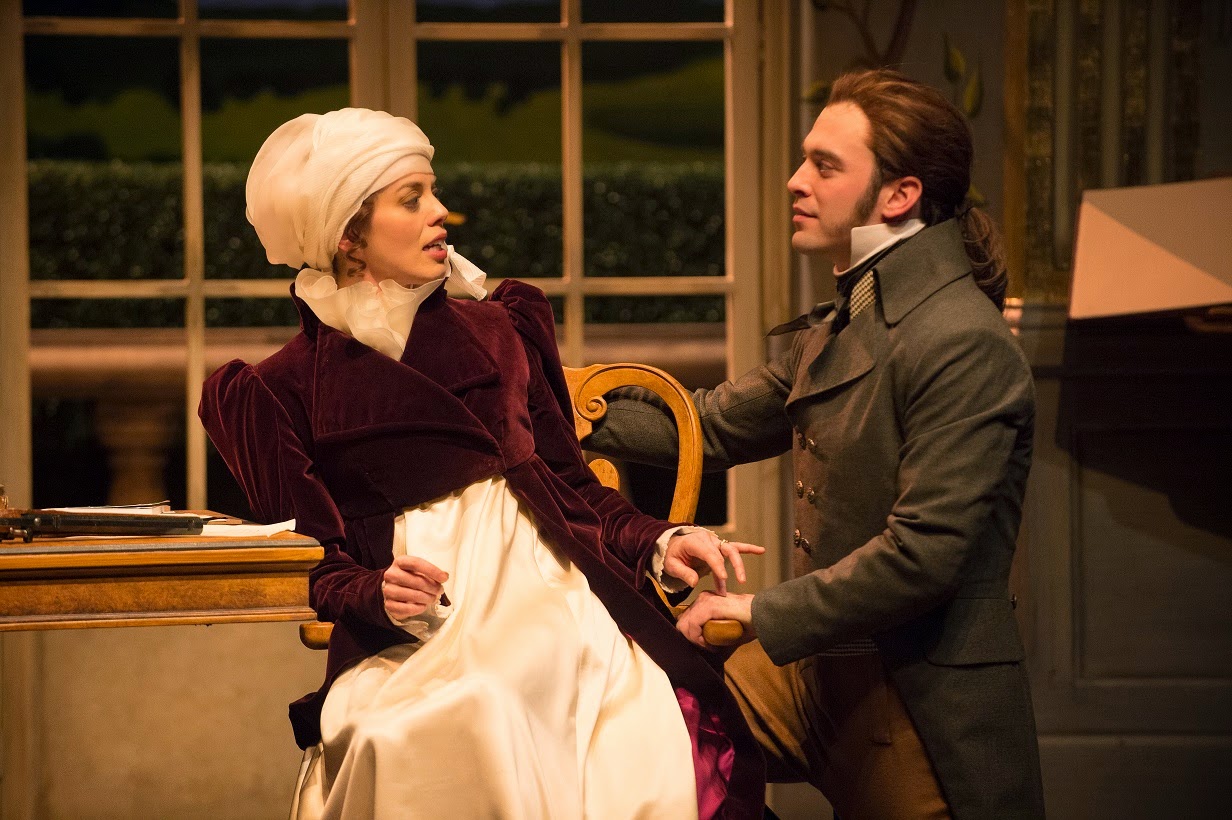 Arcadia at the Citadel Theatre. This is currently my new favourite play.  Other than when I am directing a show, I rarely want to see a play more than twice.  With this Tom Stoppard work I am so excited to be seeing it for the third time on Sunday (and I am trying to figure out if I can justify going again on Closing).  It's complicated and simple at the same time.  A mystery and a romance and full of sparring academics and the quest for truth and knowledge.  It takes place in two times 200 years apart in the same English manor.  Though separated by time, the parallels between the two stories are fascinating and Stoppard has managed to intertwine them with humour.  There's some heady content, but there's also many moments of deliciousness for the audience when they know more than the characters do. This opened last night and runs to April 12th.

A Dream Play at Studio Theatre.  This is a Strindberg piece and the U of A has cast all 5 women in the graduating BFA class as the only female character in the piece.  I haven't seen it yet, but I am hoping to book tickets soon, as they have reconfigured the Timm's seating so that there are far fewer seats than usual and as a result they already have some Sold Out performances. It looks like a challenging piece and I trust that the U of A has done their usual solid work. 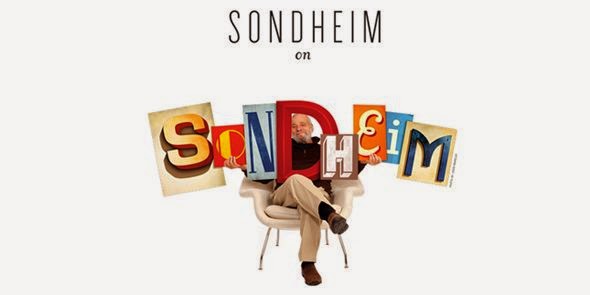 Sondheim on Sondheim at MacEwan University. For those who love musicals and more specifically Sondheim this would be a great show to catch.  It's in the Theatre Lab space so tickets are tight for it as well, but it would likely be a great show to catch if you love Into the Woods or Sweeney Todd. It closes next Thursday, April 2nd (probably due to the Easter weekend) so don't get complacent and figure on seeing it next weekend! It was also directed by Kate Ryan who was wonderful earlier this year singing with Susan Gilmour in a Sondheim Cabaret at the Citadel, so you can be assured that it's been well steered.

These are just a few you could see.  I am sure there are others you could check out.  Tix on the Square is great for seeing what's out there.  Make this your World Theatre Day and see a show!
Posted by Finster at 5:02 PM No comments:

Thank you so much to whoever nominated me for the #yeggies again. The #yeggies are the Edmonton New Media Award created to recognize and celebrate outstanding social media content creators in the capital region. It was very exciting to receive the email letting me know that I had been nominated in the Arts & Culture category for the second year in a row. I always feel strange filling out the "tell us why you should win" part of the process, especially when I saw who else was nominated with me. We are lucky to have the Arts Scene we have in Edmonton, and doubly blessed to have so many avid supporters and champions of that scene.

In my category, I thought I would share my fellow nominees so that you can all start following them as well!

Best in Arts & Culture
There's a variety there - from theatre, to dance, to books, to nerd culture, to comics based art. I recommend you check them out and follow what appeals to you! I'm thrilled to be nominated with them all and had a good time checking out the ones I was unfamiliar with.

The Main Event (Awards Ceremony) is on May 9th at La Cite and I will be there with bells on!
Posted by Finster at 5:52 PM No comments:

First Time, Last Time - Redefining a relationship by refusing to define it... 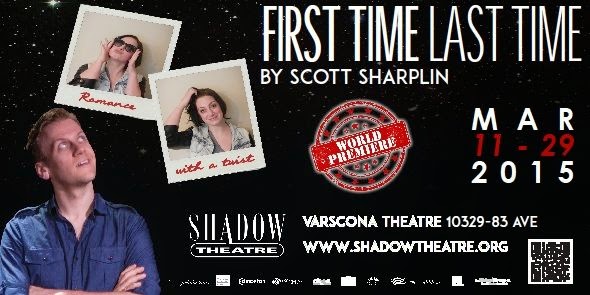 This past weekend, I took in First Time Last Time by Scott Sharplin at Shadow Theatre with my good friend @catharooni.  We had a lovely evening in the Strathcona area, starting it at The Next Act for dinner and then taking in the show down the street.  I used to be in the area so much more than I am lately, so there is always a wonderful feeling when I have a good reason to go there!

The play is about two people who meet each other in the familiar pick-up place of a nightclub and both being inexperienced sexually (but wanting not to be), they decide to hook up as long as the first time is the last time.  The two, Ben (Mat Busby) and Airlea (Madeleine Suddaby), are very different in personality and type, but find themselves compatible and they find a unique way to modify the initial verbal contract so that the non-relationship extends into years.  It's a very funny exploration of how far a couple might go to construct a non-relationship out of what is clearly a relationship.  It seems to primarily be Airlea who is over-reluctant to define the nature of what they live-in. The situations and responses are humorous, complete with changing wigs and outfits and 'new first times' as time passes. I found the two actors to be quite engaging onstage and they seemed to have a real rapport. Busby is quite charming and Suddaby is a bubbly ball of energy that draws you in. And, although I found it hard to believe that a couple could stretch the contract so long, it was interesting. It made me think a lot of friends that I have who insist on bizarrely labeling their own relationships unconventional in reaction to some societal 'norm'.  I have to admit, I do a bit of internal eye-rolling when labels are just exchanged for other labels when all it comes right down to is that the only person who cares about how you define the relationship is the one you are in it with. I wish I understood more about why the two of them push against commitment, particularly Airlea, because I think Ben does want the relationship.

Overall though, the play makes for a fun night out at the theatre.  It gets a little serious towards the end but in a heart-touching way, and there is some wonderful theatre magic when the audience gets to participate.  The framework of the piece contains some direct audience address, which bothered me until the audience pull-in made me forgive it.  It takes a while, but it does earn it in that magical moment towards the end. I recommend this show, for there is a lot to think about, and it's a lot of fun.  It might make you understand why someone didn't commit to you, or why you are with the one you are with. And while I don't recommend this kind of contract, there is something to be said for avoiding a routine in a relationship... a few 'firsts' when things get stagnant are never a bad idea!