We value your opinion.... 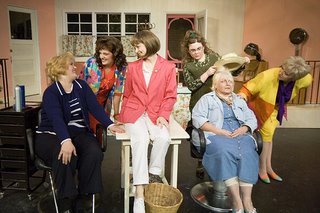 Well, yesterday we got the review in Vue Weekly (previous blog). I was very delighted since I got such a lovely paragraph and I thought overall that it was a very nice review. It was then more difficult at the show. It is tough in a cast of 6 to have 2 people singled out in the extreme positive, 2 others with a mention, 1 not mentioned at all, and the 6th mentioned but in a somewhat negative way. I feel for my cast mates. I personally cannot see the characters as anyone else but them now after the process we have gone through so it breaks my heart that they are affected by the review. It is hard too, because I would not give back my paragraph, for I love it, but I find myself comforting my castmates and I worry that they see it as hollow. It isn't.

Two more shows. I pray for the right combination of emotion to sustain the last scene through to the end of the run. It is very draining and I feel empty sometimes.
Posted by Finster at 12:30 PM 1 comment:

A Good Review - Good for the Ego

I’m predisposed against plays like Steel Magnolias, but it’s got a lot more to do with aesthetics than gender. Sure, it’s “chick” fair (there’s no clever “flick” or “lit” rhyme for theatre, sadly), but, more to the point, it’s not particularly good chick fair. Playwright Robert Harling draws six caricatures who practically ooze overcooked Southernisms and uses them solely in service of a cloying plot that simultaneously manages to supposedly celebrate women’s strength as it cements them in every easy stereotype it can manage.

It is a serious, serious credit to director Linette Smith and her cast, though, that the Walterdale’s production of Harling’s contemptible little play, set in a Southern hair salon before and after the wedding of a young Shelby (Rebecca Pontig), is a thoroughly engaging, casually charming evening of theatre. Where Harling goes wrong, Smith and her troupe go right, earning with their natural charisma and chemistry a kind of emotional honesty that Harling just doesn’t on the page. Much of the credit is due to Kristen Finlay (mother-of-the-bride M’Lynn) and Lisa Pulak (wealthy socialite Clairee) who play markedly different roles to similar levels of efficacy.

Finlay works as the emotional core of the play—no small feat considering four of the other five are essentially different forms of comic relief and Pontig is at times too tentative in her tragic role—and her anchor is crucial in keeping it grounded: without her sitting indignantly under a hair-curler after an argument with Shelby, or watching the tears essentially creep up from her feet until they burst through her eyes in the play’s final scene, the play would be as empty as Harling envisioned it, but her stern, honest emotions lend a gravitas to even the one-liners.On that side of things, Pulak excels. She bursts forth pure sass with the unrestrained glee of a wined-up aunt at Thanksgiving, and her boisterous cackle fills the stage at every available opportunity.

Erin Foster-O’Riordan as the pragmatic Truvy and Lousie D Maryniak as the sour-faced Ouiser have their moments as well, but Pulak seems most comfortable in her role, sniping—albeit in good humour—from her stylist’s chair to add levity to nearly every occasion. One can’t help but wonder what they might have pulled off with better source material, but such wondering seems redundant: they’ve found gems where there should only be dirt, and that’s harder to pull of anyway. V
To Sat, Oct 28Steel MagnoliasDirected by Linette SmithWritten by Robert HarlingStarring Kristen M Finlay, Lisa Pulak, Erin Foster-O’Riordan, Lousie D Maryniak, Rebecca PontigWalterdale Playhouse (10322 - 83 Avenue), $12 - $16
Posted by Finster at 8:25 AM No comments:

To wake to screaming...

I shouldn't complain... I did get to sleep in... but I woke to the sounds of my children screaming over toys and sharing. Ahhhh... Show today. Matinee. Will likely be a bit different because fo the time of day.

Still disturbed about the children's birthday parties at the spa (for 10-12 year olds, ONLY $75 per child!!!!!!). What kind of world do we live in. Will write more later when I can focus on my rant.
Posted by Finster at 10:13 AM No comments:

Tired - Why can't I do this late night thing anymore...

It is really not that fair to feel so crappy when all I did was stay up late. I used to be able to go on 4 hours of sleep - no problem. Now I stay up late and I am a mess. It doesn't help that I can't sleep because of the wee bairns. Oh well. The show went well last night. I am so pleased that I seem to be finding the right emotional place to go to that will get me where I need to be. Then photos after that weren't too painful, but it meant another late night. It didn't help that i ate some BBQ chips onthe way home and then woke up at 2:30 AM feeling like I was going to be sick. I wasn't, but it was unpleasant. I hope for a nap.

Steel Magnolias - at the Walterdale until October 28th. Tickets at Tix On the Square.
Posted by Finster at 10:56 AM No comments:

Just coming off the first two "real" shows of Steel Magnolias at the Walterdale (We run to the 28th of October - hint hint). What a great feeling. The role of M'Lynn has been so good for me. I usually play the loud funny one, and although I do get to be funny, I definitely have to mine much more emotional depths for her than I ever have before. I have been so pleased with how the journey has gone. At one point in the rehearsal process I went through a real feeling of "I am such a fraud" and "soon they will figure out I have just been faking it all". This happened when I started to doubt myself. Luckily I used that in the whole process and it really helped. I have been surprised at the generosity of the audiences when we come out for bows. I have never been able to immerse myself so completely in the world of the play before. Ah.

What will be next? I am still thinking about Hello Dolly! with ELOPE. With the new store it will be hard to spare a lot of time, but I haven't ruled it out. I also have yet to hear from APN about the Dramaturge for my One Act that will be produced by the Walterdale this year (May 2007 - "Pieces"). So pleased to have been selected. I also need to get back to writing beyond my Morning Pages. I have to get a shape/direction/focus for my next play and I need to edit the crap out of the one in progress that is too close to home and reality to ever be produced without really alienating some people I know...
Posted by Finster at 12:50 PM No comments: