Pardon My French... Glengarry Glen Ross and The Passion of Narcisse Mondoux...

Over the last little while I went to two Opening Nights at local theatres. 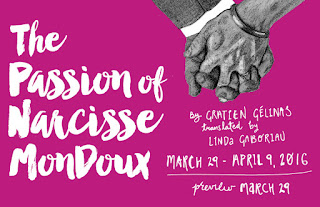 The first was The Passion of Narcisse Mondoux a co-production of Northern Light Theatre and L'Unit Theatre.  A unique experience as the play is performed by the same actors (Brian Dooley and Manon Beaudoin) on alternate nights in French and English. It's a lovely little piece about a widower Plumber who has set his sights on a recently widowed women who he has always been in love with. They are very different, but Narcisse Mondoux (Dooley) is doggedly persistent and flexible to achieve his goal. It's a script that subtly deals with preconceived notions of roles men and women and the power of "love" to allow those notions to bend and shift. The humour is familiar and sprinkled liberally throughout and the two actors convey a soft and believable affection for each other. The show runs until April 9th at La Cite.  Check the link above for which performances are in English and which are in French. 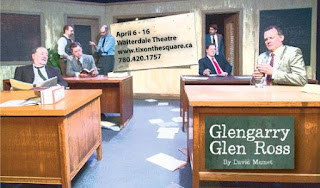 The second was Glengarry Glen Ross by David Mamet playing at Walterdale Theatre until April 16th. This production is tight and engaging and fast-paced, as Mamet needs to be.  The cast of seven (Dale Wilson, Alex D. Mackie, J. Nelson Niwa, Cory Christensen, John Evans, Justin Deveau and Cale Baylen) embrace the coarse language and coarse tactics in the high pressure world of dubious land-sales in the 1980s. These guys, and they are "Guys", are cut-throat and hungry and they attack the language and dynamic with a fierceness.  The script is liberally laced with expletives but it all feels right in this world. It's quick and sharp and it's hard to look away. I was completely drawn in from start to finish.

Some great options for you this week in #yegtheatre
Posted by Finster at 8:09 PM No comments: