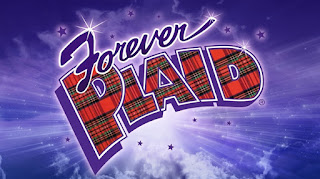 Last night, the boys and I took Mark to the Mayfield Dinner Theatre to take in Forever Plaid, one of his favourite musicals. Lucky us that the timing was right to make for a terrific Father's Day present!

We had a great time! It's always interesting to revisit shows that you've seen before and hard not to reflect on the differences and just enjoy what the new production brings to it. This production had amazingly tight harmonies that showcased the superior vocal blend of it's four performers (Kaymar Pazandeh, Andrew MacDonald-Smith, Farren Timoteo, and Steven Greenfield). I've never seen Pazandeh onstage before and I have to say, his voice was a real treat, a beautiful bass-baritone that was incredibly smooth! I'm a big fan of  both Timoteo (Peter and the Starcatcher - Citadel) and MacDonald-Smith (Crazy For You - Citadel) so it was great to see them onstage together. The four of them worked together well to set up the jokes, and the show had a nice smooth flow. My favourite numbers were Chain Gang/Sixteen Tons and the Carribean (Kingston Town, Matilda, Jamaica Farewell) section. I also really liked Perfidia, because I love that song and these guys rocked it! 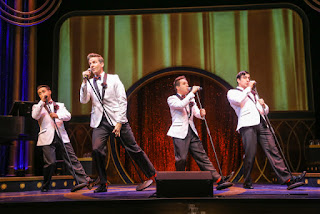 Here's what Mark and Gibson had to say...

"The harmonies reminded me what I love about that style of singing and got me thinking about singing again." - Mark

The show is a wonderfully fun and nostalgic trip (I indicated to Gibson that you could tell who the older people in the audience were because they were laughing the most at the Ed Sullivan Show jokes), but also has the ability to create new fans as evidenced by Gibson downloading the soundtrack from Apple Music immediately following the show.

Forever Plaid runs until July 29, 2018 at the Mayfield Dinner Theatre. It's a nice 90 minute show (no intermission) with a fabulous meal - perfect for a summer evening out!

You can purchase tickets here.
Posted by Finster at 11:14 AM No comments: