Away in Banff... Having a wonderful time!

I have been in Banff for the last two weeks and will be here for 2 more weeks as the Intern Director for the Citadel/Banff Centre Professional Theatre Program. It's an intensive and rigourous program and I am blogging about the experience here: http://cbcptp2017.blogspot.ca/

When I return I will be Assistant Directing Sense and Sensibility at the Citadel Theatre. 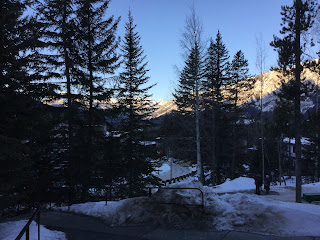 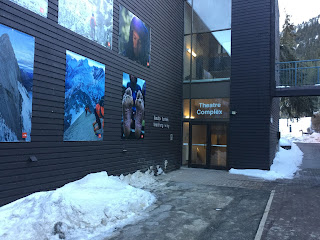 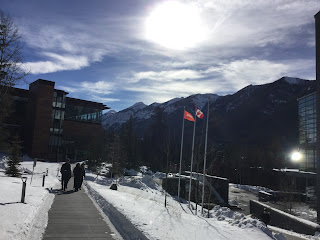 Cinderella, BUST and Moi, Monsieur, Moi! All over the map - literally!

Well, I traveled from Italy to Fort McMurray and then to Senegal this week in my theatrical adventures! I also took in an Opera, a new work and a one-woman show - variety that is a testament to the many different theatrical offerings available in Edmonton in most months!

Cinderella (or La Cenerentola) at Edmonton Opera was a delightful, silly romp! The cast went for the ridiculous in this Cinderella story with a twist (the Prince is also in disguise!). Supported by terrific costumes and a fun set, this was a great light-hearted adventure. I enjoyed the singing, particularly from Krisztina Szabó as Cinderella and John Tessier as Prince Ramiro. They made a lovely couple! It was also nice to go to an opera where you don't have to rely too heavily on the surtitles because you know the basic story and the step-sisters and Dandini provided many over-the-top comic moments! 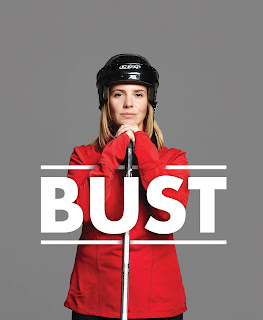 Bust at Theatre Network took us to Fort McMurray post-wildfire. I have to admit, this show had me apprehensive, as most shows about Fort McMurray do. I am not sure that it captured much that I recognized as being specifically Fort McMurray any more than any other smaller city in Canada, so I could relax a little in that. I think for any of my friends who went through the fire, that this would be a challenging show to see - because there are trigger moments that might be hard to deal with. The set is gorgeous (although there should be snow... if they're playing hockey in McMurray there will be snow outside). It evokes more the burnt out  forest surrounding the city. Note: for people familiar with Fort McMurray and what the area around the tailings pond looks like, you will have to accept that there was dramatic license... The cast is a committed ensemble. Louise Lambert stands out with incredible drive through the piece and Lora Brovold delivers a heart-breaking monologue about loss that I really connected with. 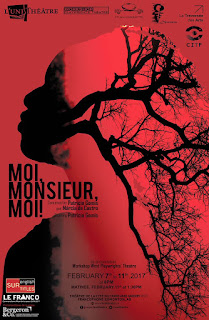 Moi, Monsieur, Moi! at L'uni Theatre was a one-woman show about a young girl born in Senegal who was passed on to an aunt, a cousin, an uncle. It was brilliantly performed by Patricia Gomis using puppets, props and a terrific story-telling ability. It's a story with humour and sadness and truth. Truly entertaining but not veering away from challenging and difficult topics. French with english surtitles. I took my husband and he liked it so much he returned the next evening with our sons.

On the Horizon... The Citadel/Banff Professional Theatre Program...

I haven't written about this yet... too busy preparing and getting things ready for me to go. But in a few short weeks I will be starting an amazing career adventure. I will be the Director Intern for The  Citadel/Banff Professional Theatre Program. What does that mean? Well you can find out more about the program here. For me, specifically, it's an opportunity to learn more about how to direct from some of the top theatre professionals in Canada and following the program I will be Assistant Directing Sense and Sensibility at the Citadel. I will also be there with the 12 Acting Participants (who will be in Sense and Sensibility) and another Directing Intern who will be Assistant Directing Peter and the Starcatcher. I anticipate that it will be rigorous and challenging - I am certainly hoping it will be - and I also believe it will be incredibly rewarding. It will be wonderful to immerse myself with my fellow artists and simply commit myself to artistic growth.


Past Participants from ebenezerink37016692 on Vimeo.