Those who self-destruct and those who try to help... Pretty Goblins at Workshop West... 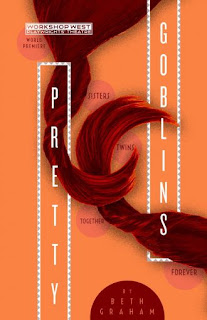 I took in Pretty Goblins by Beth Graham presented by Workshop West Playwrights Theatre last night. It tells the tale of sisters, fraternal twins, Lizzie (Miranda Allen) and Laura (Nadien Chu), and their battle through life. One twin is wilder and self-destructive and an addict who cycles in and out of functional and dysfunctional existence. The other, calmer and more rational, but equally tortured as she is unable to 'save' her sister time and time again. It's told in flashback, and episodes, so we see how these two incredibly close children with the same parentage and opportunity can veer into vastly different adult lives. It's hard to leave the play without a discussion of nature vs. nurture as there are contributing factors from both. It's also hard not to leave the play with an incredible amount of empathy for those who have a self-destructive loved one in their lives. The struggle to support, and try to help after being pushed to the breaking point time and time again is heartbreaking.

This production has all the right components. It is skillfully and sensitively directed by Brian Dooley whose direction never confuses us as to where and when we are and which handles the gruesome parts honestly but with incredible respect for the script, actors and audience (there is one section that is particularly tough). The performances of Allen and Chu are layered and believable even as they zig-zag from past to past to present, and each has an evolution which feels inevitable but you wish wouldn't have to happen. Interestingly, I think that it's easy to imagine these actors in the other role, underscoring the nature vs. nurture discussion. The world that production designer Megan Koshka has created is both beautiful and ugly - depending on what it needs to be - a squalid room, a child's bedroom, a wedding reception...

Pretty Goblins runs to April 29 at the Backstage Theatre. Tickets can be purchased here.
Posted by Finster at 10:12 AM No comments:

More than tea and scones in Going to St. Ives... 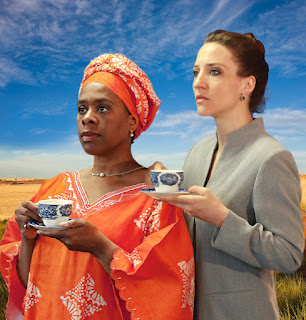 Sometimes you completely have the wrong assumption about a play and you are wonderfully surprised when that is turned on its ear... That was me tonight at Going to St. Ives at the Varscona Theatre presented by Altas Theatre Company. I hadn't read too much going into the show so all I knew was that it was about two women meeting for tea. There was so much more.

The two women could not be more different. May N'Kame (Patricia Darbasie), the mother of a despotic African 'emperor', has come to England to receive eye surgery from Dr. Cora Gage (Belinda Cornish). Prior to the surgery Dr. Gage has something to ask of her patient - a favour. There are of course, complications and consequences to this request.

The script by Lee Blessing is wonderfully complex, and skillfully directed by Julien Arnold. Each of the women is brilliant and articulate and they each have a very good understanding of their world. They are however both somewhat prejudiced with how they see the other's world. Their cultural differences mean that each steps on the other's toes at times - sometimes deliberately and sometimes accidentally. Both Cornish and Darbasie give complex and layered performances. This is not their first time in these roles as the play was presented a few years ago with the same cast, and I think because of that they both really know these characters they are playing. There is a real investment from both of them and each has their moment of raw and exposed truth.

Beyond the performances, what I liked was that it challenged me and how I think about the world. I don't know if it gave real answers and solutions, but it certainly says that there aren't a lot of easy ones out there.

Going to St. Ives runs to April 14 at the Varscona Theatre. Click here for tickets.
Posted by Finster at 11:09 PM No comments:

Going Undercover with Spontaneous Theatre at the Citadel... 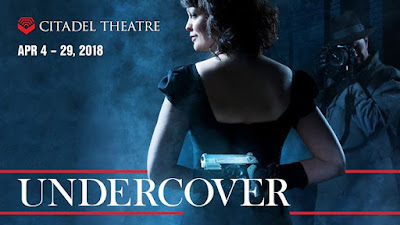 It's really fun watching a murder mystery when even the actors onstage don't know how it will be solved... solving it is almost entirely up to an audience member turned Rookie Detective (on our night - Jason, a trainer at a tech company), who is brought into the story and who literally guides the investigation.

The first act is primarily the set-up. The cast (six gifted improvisers playing multiple roles) meet for a private art auction (the rookie detective is sent in 'undercover' for police business) in a remote country home. There are obvious tensions between certain characters, conversations to be overheard, snooping to be done, and clues discovered, and then... there's a theft and a murder! The second act is where the rookie detective must lead the investigation - they choose who to question, which rooms to explore, what questions to ask and inevitably reveal 'who done it'.

For the rest of the audience, it's like watching a person solve an escape room, and even when they miss important clues it's hilariously fascinating. A smugness when you see or notice something they didn't and lots of laughs when they do something totally unexpected and you watch as the group of six gifted improvisers literally make it up on the spot to deal with what's thrown at them.

Now, our guy didn't get it right - he got part of it, but not all of it - but it was sure fun watching him and the cast. My husband was very happy, because apparently he did solve it (he saw a lot more than I did), and even though he 'knows what happened', he's heading back with our son this weekend to watch it again with a new rookie detective. He's hoping he'll get to see some of the scenes we missed out on the first time and he wants to see if our son can solve it.

Undercover runs to April 29 at the Citadel Theatre. Click here for tickets.
Posted by Finster at 10:38 PM No comments:

A couple of plays about women getting fed up with what other people want them to be...

You wouldn't think there would be much in common between SLUT at Northern Light Theatre and Blue Stockings at Walterdale Theatre, but at their core they really deal with the same thing - people telling women what they can and can't do and those women pushing back. 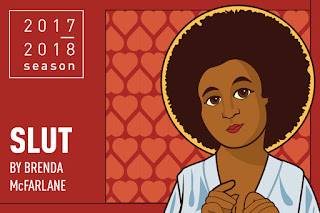 SLUT tells the tale of Matilda whose sexual activity has gotten her into some undeserved hot water due to the judgement of her neighbours. Matilda, played by the facile Michelle Todd, is in a situation she's unprepared for. The situation itself is laugh-producing and Todd's retelling of the circumstances that have led up to it is wonderful. In addition to Matilda, she deftly conjures a handful of other characters who help tell the story. Layered under it all is a conversation we likely never have (but should) about differing expectations for women and men in sexual relationships, or rather about presumptions (incorrect ones) about those differing expectations. It's not gratuitous - it's funny, smart and human. I really liked Matilda and her honesty about where sex fits into her life, and I like the softness of her in contrast to her bold outfit. The lights (designed by Beth Dart) are like another character in the play, commenting and maybe even judging a little - It lights could wink or roll their eyes, this is what it would look like. 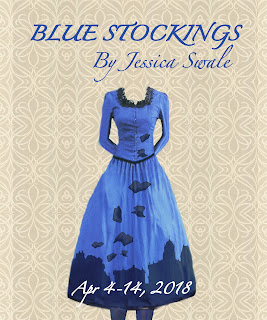 Blue Stockings at Walterdale (full disclosure: I worked on the show as Mentor Director) is about women seeking educational equality in England at the turn of the century. It too is layered with assumptions about what women want and need and articulates the complexity of what the reality is. It also has humorous moments, primarily when we are confronted with the rhetoric of the age in contrast to our modern day beliefs (the theory of the wandering uterus always makes me laugh - where is it now? in my throat? In my armpit?!). Sadly, there are still people in the world (even in our own country) who still adhere to some of this outdated thinking. It's well worth checking this show out to see how far we've come, and to reflect on how far might still need to go.