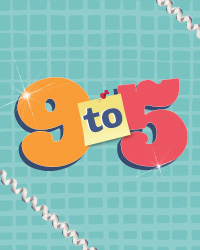 Last week I got to take in the Preview performance of Grant MacEwan's production of 9 to 5. It's the musical adaptation of the 1980 film of the same name. I loved the movie and I loved the musical. Outside the title song, I was unfamiliar with the music, but it was fun and smart and well-sung by the cast. It was filled with great singing, and the three lead women (Kristen Schaeffer, Darian Yurkoski, and Lindsay Downs) were awesome. Opposite the feisty trio was the hilarious Stefan Theriault as Mr. Hart. His commitment to playing up the worst in the misogynistic CEO was hysterical. There's great choreography and the show is fast paced and will keep you laughing!

9 to 5 runs at the Triffo Theatre until December 8.
Click here for tickets. 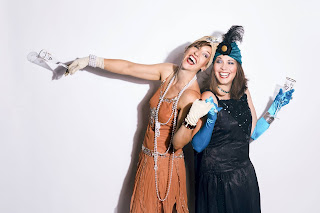 Another show that had me laughing out loud was Fallen Angels presented by Bright Young Things at the Varscona Theatre. A stellar cast led by Belinda Cornish and Vanessa Sabourin, there were so many laugh out loud moments. The physical comedy was simply brilliant! I never thought watching two women get drunk could be so incredibly funny! Sadly, the show closed last night so you can't see it any more, but I encourage you to keep Bright Young Things on your list of theatres to support, as they definitely know how to create a fun night of theatre!
Posted by Finster at 10:52 AM No comments:

Who Speaks For Those Who Can't? MATARA at Workshop West Playwrights Theatre 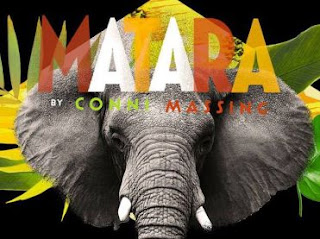 This weekend, I had the pleasure of seeing Matara, a new work by Conni Massing, at Workshop West Playwrights Theatre. A zoo elephant Matara, or Nellie, is at the centre of the story. Cared for by Karen (Elinor Holt), Matara is not in the best of health and a group of protesters camp outside the gates, demanding she be sent to an elephant reserve far away. The protesters are held at bay by night security guard Marcel (Minister Faust), and newly hired communications expert Romney (Patricia Zentilli) recognizes the value of an elephant in selling the zoo.

The three characters are complicated and connect differently to the zoo and to Matara. The play really highlights the complexity of the issue, that what is the best decision is not necessarily black and white, and the limitations on the three characters to communicate and be heard further obstruct finding the right course of action. No one seems to hear what the others are saying because the narrative they need to hear is not being said. Romney needs Nellie to 'perform' in order to raise money for the zoo and care for all the animals; Karen needs to protect Matara in order that she can get well again; Marcel needs someone to listen to his concerns about the rising river. All three are unable to hear what the others are saying. 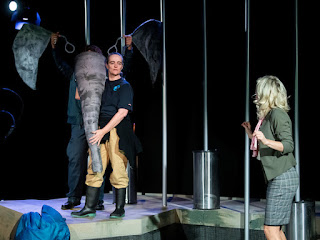 I loved the relationship between Karen and Matara. I believe that those who care for animals (zoo-keepers, vetrinarians, etc...) want what is best for them and this show certainly portrayed that. Holt's performance is honest and passionate. Karen is the only one who truly passes the test of King Solomon - she is willing to give up the elephant if that is the best thing for it. In contrast, Romney has little connection to the actual animals that reside in the zoo. She is, however, trying to do her job in order to help provide for them. She just doesn't seem to have much compassion to go along with her drive. I wish there was a way to make this character more likable. Having worked in a marketing department for a theatre company I know there are often times when the need to sell the show conflicts with the artistic agenda and there can be unanticipated friction. Marcel is caught in the middle between the two women. Faust is very congenial as Marcel, a careful sounding board who chose the job for it's offer of seclusion, but who instead finds himself rarely alone.

Along with the three human performers is a beautifully created Matara. The simplicity of creating the elephant through simple pieces and movements of ears and trunk work beautifully and you can really believe there is an elephant in the room.

Wherever you stand on zoos, I think this show offers a lot to think about, particularly about issues that are complex and multi-layered. Too often in today's world, we look at a situation and declare a side without truly listening to all the details. We choose to ignore the other side if it conflicts with what we want and in doing so, we likely miss key details that make each situation unique. A conversation needs to be part listening, and listening has to include actually hearing.

Matara runs to December 9th at the Backstage Theatre.
Click here for tickets.
Posted by Finster at 10:16 AM No comments: