The Curious Incident of the Dog in the Night-Time - Really Seeing Someone... 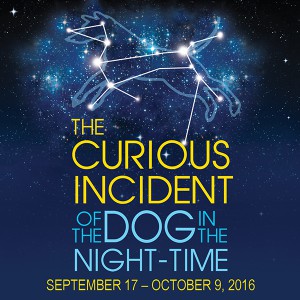 It's here and it's open and it's onstage - The Curious Incident of the Dog in the Night-Time at the Citadel. When I first heard we were doing the show I was so excited. I was a terrific fan of the book and had heard tremendous things about the stage play so to have it produced here was something I was really looking forward to. It did not disappoint. Overall, the experience is complex technically combined with grounded story-telling. It evokes the book, while still being it's own animal. Kudos to the cast and creative team for finding a way to tell the story in their own way (the conceptual design is quite different from the Broadway and London productions).

What I took away from it, however, beyond the amazing projections and clever way the set represents Christopher's brain and the wonderful commitment to telling the story by the actors, was how it made me see Christopher. It made me actually see this wonderful unique human being who just happens to be neuro-atypical. Too often I think we simply recognize that those were are different are there but we don't really see them. What the play does is make you see Christopher and empathize with him. I was angry when the other characters in the play spoke about him as though he wasn't in the room, because he was there, because the production and the remarkable performance by Edmund Stapleton made you see him at all times. It made him more than just a collection of tics and behaviours. It made him completely and wonderfully human. Now, I hope that I can carry that with me and I hope that others do too.

The Curious Incident of the Dog in the Night-Time runs to October 9th on the Shoctor Stage. Call 780.425.1820 or go to www.citadeltheatre.com for tickets.
Posted by Finster at 8:09 AM No comments:

Labels: The Citadel, The Curious Incident of the Dog in the Night-Time
Newer Posts Older Posts Home
Subscribe to: Posts (Atom)