What are the chances? Sequence at Shadow Theatre... 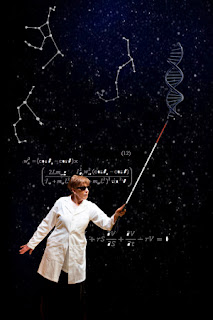 I wish I'd had more time this past weekend to post.  I would have written about Sequence by Arun Lakra, now playing at Shadow Theatre. I saw it last Friday and really liked it.  What I loved the most about it was the extremely clever and smart script.  This was the winner of the 2011 Alberta Play-writing Competition and it's easy to see why it won.  The play is a study of chance and probability, of genetics and mathematics, and of humans dealing with all of them.  Two stories, seemingly unrelated, are told simultaneously, and layer by layer the probabilities add up.  I'm a bit of a weird mash-up of science and drama so this was the perfect piece for me.  My Education degree is a Physical Sciences (Physics and Chemistry) Major with a Minor in English and Math.  I have since taken enough Drama courses that I could have a major in that, as well.  So I really enjoyed the merging of my many worlds.  I loved that the script is smart - not just throw-away puns, but sophisticated references (and yes, I got the golgi body joke). It's also quite accessible, so fear not if your science is not up to snuff.  If you can understand the logistics of chance that exist with the flip of a coin, I think you'd be fine.

It's the layering and unwrapping of the play that's done so well.  The reveals in the two stories are carefully measured out for maximum payoff and aha moments. Although it engages your brain, I don't think you'll find it mentally exhausting - it's more of a yoga class than a free weight session - I think you'll leave a little more enlightened.

Sequence runs until November 16th at the Varscona.
Posted by Finster at 4:52 PM