I saw a lot of theatre this year.  I like that.  I have said it before and I will say it again, but I feel so incredibly blessed to live in Edmonton because of the variety and the amount of theatre we get to see. 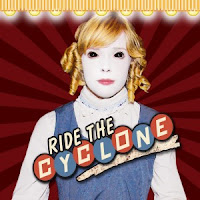 First of all, this list is not exhaustive because I saw a lot.  I think you'd have to flip through the blog to read about everything.  These are what stayed with me for various reasons.  Other people would have a completely different list...

Second of all, there is no real order to this list.  It's not a ranking, more a reflection...

My favorite theatre experience of the whole year was Ride the Cyclone at the Citadel.  As I compiled everything it is the one that kept coming back to me.  So fresh, so odd, so Canadian and so well done.  I saw it twice and wished I could have seen it more.  It's not often I want to see a show more than once, but this one I did.  I would see it tomorrow if it were playing here still. 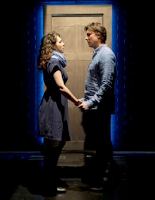 My favorite play of the year was Let the Light of Day Through from Theatre Network. As a playwright I marvelled at the unwrapping of the story and I thought that it was a beautifully presented with honesty and humour.  I laughed and I cried and I hope to see this play go further.  It is a play that transcends Edmonton and should be seen elsewhere.

The Citadel brought a lot of great moments to my year in theatre.  I loved Beth Graham and the fearless cast of The Penelopiad and I was tickled by Ronnie Burkett's Theatre of Marionettes and The Daisy Theatre (so much so that I saw that one 3 times!). I was caught off guard by how good 2 Pianos 4 Hands was... I mean, I expected good, but it surpassed my expectations! It was a treat to take my kids to that show and listen to Gibson giggle through the entire first act. it was also a treat to take my mother to see Long Day's Journey Into Night.  It has long been once of my favorite plays and it was wonderful to see it performed so excellently for the first time. 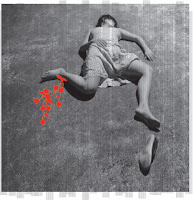 The theatre that got me thinking this year was Northern Light Theatre.  Both Ride and Dust made me think about things long after I saw them.  I am long past the casual dating of Ride and never have confronted the issues in Dust, but both were fascinating with strong performances from actors directed delicately by Trevor Schmidt.  They avoided the over-play that we see so much on our stages and took us somewhere real.  Both of these were so good, but it was An Accident that broke my heart. Michael Peng and Melissa Thinglestead - can't say much more than that. Anger, bitterness, blame, guilt and survival - It was all there. I still think about that play. 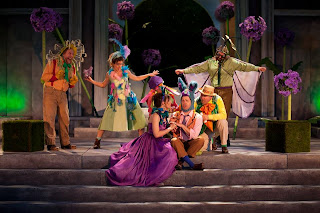 I really liked both of the Freewill Players productions this year.  I wasn't going to go to A Midsummer Night's Dream since I have seen it so many times and have even been in it, but a blog post I read intrigued me.  I was so glad I did as it re-invented it for me.  I had never seen King Lear before and went twice to make up for that!

Speaking of Midsummer, I checked out Midsummer (a play with music) at the Roxy, the premiere production by Broken Toys Theatre and had a fabulous night laughing and feeling like I was a long for a wild ride.  I also caught Broken Toys second production, The Three Sisters, at the Varscona.  It was another laugh-filled evening.  I still marvel at the size of the cast.  For an indie production it was so weird to see so many bodies bowing.  I really loved Clinton Carew's adaptation and hope he does some more as he certainly dusted the cobwebs off this Chekhov piece.

Freewill wasn't the only place I got good Shakespeare this year.  I saw a fabulous production of MacBeth performed by the 3rd year BFA class at the U of A.  It had some of the best stage combat I have ever seen and in corner stage it was right close up and personal. I also saw one of the MFA candidates media room show - Much Ado About Nothing.  It was so fun and delightful.  You'd think  would be tired of these shows that I have seen so many times before, but when they are done right and told as though for the first time like these were, they become refreshing.

On the Big Stage - the Jubilee - I was most impressed with Billy Elliot, and with the kid that played Billy  as his triple-threat tour de force was mighty impressive. I also quite liked the Edmonton Opera's Onegin.  The clarity of this performance was amazing as I relied less on the surtitles and more on the performances of the Russian-speaking cast.  Every choice was clear and the production as a whole was beautifully sad.

There were also some lovely 'small stage' shows.  Trunk Theatre's Days of Wine and Roses, Three Form Theatre's Ordinary Days, and Horizon Player's Marion Bridge were all well-done productions which stayed with me long after I saw them. Well-acted and directed, these shows overcame their lower budgets to provide excellent evenings of theatre. 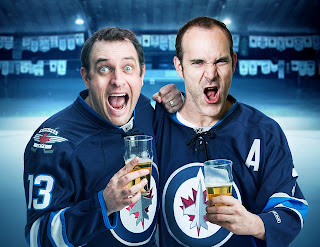 For Fringe 2013 - I did well this year.  Most everything I saw was really quite good - but the shows that have stayed with me are Hockey Night at the Puck & Pickle, Little Fish, Princess Confidential, Coraline: The Musical, and A Picasso. I could probably list more, but I wanted to pare them down a bit.  Really, I saw no duds...

It was a good year.  There were a lot more shows, but this was more about what has stayed with me.  When I read through my blog these were the shows that jumped out.

Labels: the year in review, What I Saw