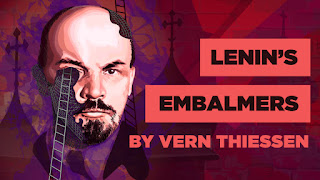 When I was in university, one of my part-time jobs was working front of house and bar-tending at the University of Alberta Studio Theatre shows. As a result, I think I saw pretty much every show there from my second year on. I have always loved the atmosphere and aesthetic of the Studio Theatre shows. The plays chosen are always smart and sharp (and unpredictable) and the design concepts are always complete and specific and imaginative. This is certainly the case for Lenin's Embalmers, currently onstage at the Timms. First of all, I was pleased to see not only a Canadian playwright, but an Edmonton playwright being produced. Vern Thiessen is not only the playwright, but he's also onstage as Lenin in this production, and that gives a little more meta to the whole thing (Lenin observes the world after his death; playwright observes his play from within after he's written it). Directed by MFA Candidate Alexander Donovan, the show is darkly funny and intelligent. The cast is excellent, embracing the stylistic choices effortlessly and managing to convey the danger of Soviet Russia while still creating a very fun show. I particularly enjoyed Chris Pereira as the science driven embalmer Vlad, and Doug Mertz in a menacing but buffoonish performance as Stalin. There're a lot of great things to this show. It's also one of those that kept me in the world while I watched it, but sent me to wikipedia when I got home to look up more about Lenin, Stalin, and Trotsky and all of that. I was also weirdly reminded of Eva Peron because of the whole embalming thing, but that's another story...

Lenin's Embalmers runs until October 20th at the Timms Centre for the Arts with shows at 7:30 p.m. Show is dark on Sunday, bit there's a Monday night performance and a Thursday matinee.  Click here for tickets.

This afternoon I took in Origin of the Species presented by Northern Light Theatre. I got there early (because I am always early) and lucked out catching the Director's Circle pre-show chat. Director Trevor Schmidt talked about several of his choices in costumes and casting and in play selection. There were also questions from the group and it made for a nice introduction to the work before seeing the play. I really enjoyed the piece. It tells the story of archaeologist Molly (Holly Turner), who finds a pre-historic woman (Kristin Johnston) on a dig, and decides to bring her home to educate her. It's very funny, with a lot of the humour coming from the elastic faced Johnston, who plays wonderfully with the idea of her character discovering the modern world from the perspective of her past. Johnston's ability to play makes her fiercer and sadder moments believable. Turner's take on Molly is an interesting journey, as she begins with the gentle arrogance of the 'one who thinks she knows best' but grows to understand that eventually as the student learns they must be released to the world, and there's a lot of wistfulness and a touch of sadness in that goodbye. The show made me think of the idea that all the cultural rules of the world are made-up, and that it's not always easy to definitively say which are best or right. As we live in a world with many conflicting cultures, it is often only courtesy and a willingness to be open that allows for civility and exchange of ideas.

Origin of the Species runs to October 27th at the Studio Theatre at the ATB Financial Arts Barns with shows at 7:30 p.m. and 2 p.m. Sunday matinees. Click here for tickets.
Posted by Finster at 9:31 PM