It's been a ridiculously busy few weeks (and still is) for theatre in the city! The good news is that there is much to see, the bad news is you can't get to all of it. I've managed to take in a few shows that still have a few dates left in their run and a few that are closed and there's a few others I wish could get to but there aren't enough days...

Ones You Can Still Catch That I've Seen: 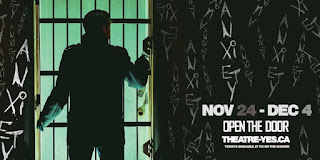 If you are into immersive theatre and theatre that is less traditional you shoudl definitely check this out. I can't give much detail because I had to sign a waiver, but it definitely was a complete theatre experience. Unsettling at times and it likely challenges every audience member in a different way. Be prepared for about a 2 hour experience. Wear comfortable shoes and don't dress too warmly. Runs to Dec 4.

Fen - Trunk Theatre (at the Varscona)
A challenging, untraditional piece of theatre by Caryl Churchill (Cloud Nine, Top Girls). This is a well-acted piece by a strong ensemble of six actors who play several characters apiece. Life is bleak in the fen and that bleakness creates some compelling characters. Moments of humour contrast sharply with the darkers ones. Runs to Dec 4.

A Christmas Carol - The Citadel Theatre
Although Opening Night is officially tomorrow, I have caught a performance already. I've also seen it a few times before. It was my first time seeing Tom Wood as Scrooge and his performance truly reinvented the show for me. Usually it's just Tiny Tim who makes me tear up. This time it was also Scrooge! Runs to Dec 23.

Ones You Can Still Catch That I Will be Seeing This Week:

Only In Vegas - Mayfield Dinner Theatre 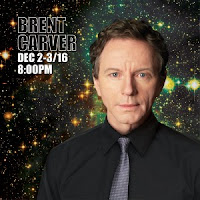 Promising music from the early days of Vegas up until present day, I'm looking forward to seeing this show tonight. The Mayfield always does a terrific job with their shows and the environment is really lovely. It's also a terrific opportunity to celebrate my husband's birthday! Runs to Jan 29.

Brent Carver In Concert - The Citadel Theatre
I am soooooo looking forward to seeing this concert. Having seen Brent Carver at the Ted Dykstra and Friends concert and Evangeline last season, I was very quick to pick up tickets to see him in concert this year. It's not everyday that you get to see a Tony-Award-Winning artist in such a small intimate venue. Two shows only - Dec 2&3. 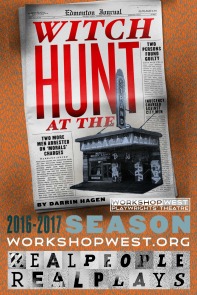 Witch Hunt at the Strand - Workshop West Playwright's Theatre (at the Backstage Theatre)
Based on true events from Edmonton's history, Witch Hunt at the Strand, tells of the persecution of members of the theatre community in the 1940's on the basis of their sexuality. I've heard great things about this show and I am really looking forward to seeing it. Runs to Dec 4.

Ones You Can Still Catch That I Probably Won't Make It To:

I'd really like to catch both Twelfth Night (Studio Theatre) and The Drowsy Chaperone (Grant MacEwan Theatre Arts) but I simply don't have enough nights. I've heard great things about both shows so if you are a Shakespeare buff or love your musical theatre here are two terrific options! They both run to Dec 3.

Ones I Saw Recently That are Now Closed:

If We Were Birds - U of A
A simply lovely piece of theatre. Well done and heart breaking, it weaves true stories of modern victims of war with the Procne and Philomele Myth. A phenomenal ensemble with Kendra O'Connor anchoring the whole thing. I have only ever seen Kendra in musicals and I was blown away by the strength of her performance.

Tornado Magnet - Theatre Network
I laughed so hard at this slice of real life from the trailer courts of central Alberta. Dotty tells it like it is and you can't help but recognize her and the world she lives in. It was great fun to go and just laugh and laugh.

Anyhow, I hope to get to writing more... when I am not at the shows! I hope you get out to see some of the great options onstage in our city!