Witnessing a Conga and a Trio of Bittergirls...

The theatre season has begun! I can tell because my calendar is getting busier over the next few weeks. This makes me happy.

In the heyday of kicking off the season officially at the Citadel, I still managed to squeeze in Witness to a Conga at the Varscona (Teatro La Quindicina). I had seen this show in it's original presentation several years ago at the Fringe. I liked it then, but was puzzled by it as I wasn't sure what it was trying to say. The current production, however, was simply wonderful. Sometimes a play needs to marinate a bit, I guess. The design helped considerably but also the show itself seemed more gelled. It was touching and funny and Andrew MacDonald-Smith's journey through his life to his wedding is full of depth. It runs until October 15th so you can still catch it! It makes for a delightful yet meaningful evening of theatre. 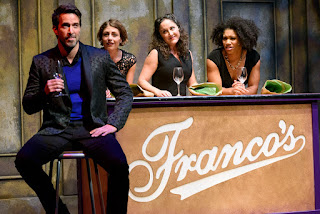 We've opened two shows at the Citadel so far this season! The first (Curious Incident) closed yesterday, but Bittergirl - the musical opened last week to a standing ovation! It opened on my birthday so I got an extra special treat seeing the show that night. I laughed so hard. Sadly and hilariously there were moments that I could related to, though I am well past my dating years. The 3 bittergirls (Rebecca Auerbach, Amanda LeBlanc and Tara Jackson) don't hold back on the humour and emotional investment. They are also amazing singers. Individually or on their own, the music is simply terrific! Jay Davis, playing The Guy, is also a treat in the show. He's great to look at, fabulous to hear sing and he plays the Magic Man, the Coward and the Mountie with such humour and self-deprecation it's so much fun to watch. Bittergirl - the musical runs in The Club until November 6th. This is a great space for the show and highly conducive to a girl's night out (you can bring your wine in!). I'm happy to be seeing the show again later this month with a couple of girls and my husband (I am sure he will enjoy it too!). It's worth it just for the music, so the fact that it's hilarious on top of that is icing on the cake!

This week I am gearing up for Red at Walterdale (my husband is in it so I am seeing it a couple of times) and 10 out of 12 at the Roxy on Gateway (Wildside) which I think will be fascinating since I have lived through many a Q2Q both on and off headset.
Posted by Finster at 11:12 AM