The Gay Heritage Project, Klondykes, 'Blak - Theatre that lets us feel someone else's experience in the world...

A few months ago I posted something on FB about liking to learn my history from novels or plays as opposed to textbooks. A lot of people indicated that I was wrong, but as I was expressing a preference, not a fact, I didn't worry about it too much.  But recently I have seen 3 shows that illustrate what I meant (or felt).  These shows, without being dry historical pieces, allowed me to understand and feel a little more what someone else's history was. 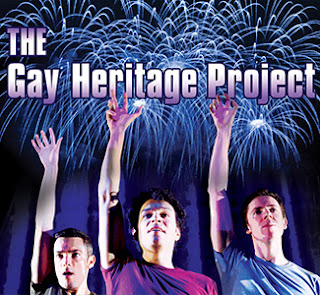 The Gay Heritage Project, now playing at the Citadel under February 27th, is a wonderful exploration of what Gay Heritage is and what it is to be gay (at least in Canada). It's layered and through a tight tumble of a variety of scenes, the 3 gifted actors (Damien Atkins, Paul Dunn and Andrew Kushnir) managed to leave me with a better understanding of what it is to be gay.  It's sometimes hysterically funny, sometimes serious, sometimes sad, and very real and personal. I had an epiphany that I hope I will hold onto.  There's a scene on a bus with a variety of queer identified individuals.  The healthy, white, gay male acknowledges that he might have it easier than those on the bus, but he claims them as his tribe.  It's the place he feels most at home. I was saddened, because I wanted him to feel at home with me - the straight, white woman that I am. But I realized that for so many of us we don't have to search for a safe place. My safe place is with my family and my history is just there. For many gay individuals this is not the case (not family, not school, not workplaces) and they have to seek out their safe places. I think that so many of us just know who we are and where we are safe, that it doesn't occur to us to even think about it.  But this show really made me think about it. I encourage you all to check it out.  It's a celebratory night which does not blame the audience, but rather seeks to create understanding both for the actors themselves and those they are speaking to.

Krystle Dos Santos 'BLAK is no longer running (it ran for 3 nights in January at the Citadel), but it too offered insight into a life experience other than my own. It was a night of stories, dance, poetry and music about what being black in Western Canada meant.  The music was amazing and it anchored the piece, but it was the stories of Brett Miles and the others that drew me in. It too had a celebratory feel - an embracing of the culture that was jubilant.  But there were moments too, that broke my heart a little.  A poem from a teenager to his younger self, victimized by bullying for being different, was so full of strength and maturity.  I wanted more of the stories - the individual experiences.  I had never heard of Amber Valley, Alberta - the show drove me to google after I got home.  I feel we could afford to know more. I know it's Black History month right now and there are events in the city that might offer some more. It would be worth it to check out 5ArtistsOneLove this month. 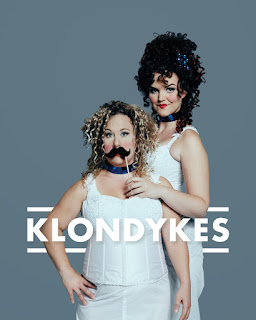 Finally, Guys in Disguise are currently presenting Klondykes at Theatre Network until Feb 21st. It tells the story of a lesbian couple in the Klondike who skirt the 'no unaccompanied women' rule by pretending to be husband and wife. Unable to fit in the world as they were, Loosey (Rebecca Ann Merkley) and Hattie (Mackenzie Reurink) find a way to make their way. Along with Narrator Amanda Neufeld, they form a dynamic trio of voices.  The show is a song cycle which uses the mood and tone of songs to reach out to the audience. The three women all have tremendous voices which are great alone and even better in harmony. Good music can make me feel more than mere words and this music (by Trevor Schmidt and Darrin Hagen) is very, very good. The story is a fascinating look into a time and world where women had few choices without the protection of a man.
Posted by Finster at 4:39 PM