Lots of Laughter in BOEING BOEING and WE'RE NOT AFRAID! 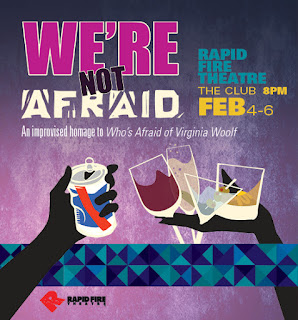 Last night I took in We're Not Afraid (part of the Made In Edmonton Series at the Citadel) presented by Rapid Fire Theatre.  The show is an improvised homage to Who's Afraid of Viriginia Woolf? (currently running on the Citadel mainstage).  It's not a sloppy copy, but rather leans on the relationships, style and themes of the show along with suggestions from the audience to produce a very funny evening of improv. The cast is the cream of the RFT Crop, featuring Amy Shostak, Matt Alden, Joleen Ballendine and Ben Gorodetsky and they were certainly up the task of delivering the deliciously biting and irreverent parody.  Armed with suggestions of a Funeral, The Moon Landing, and Ventriloquism they really went for it and man-oh-man was it funny! You don't have to have seen Who's Afraid of Virginia Woolf? to enjoy it either. Most of us are somewhat familiar with images of Elizabeth Taylor and Richard Burton to get us to where we need to be to 'get' what is being parodied.  At my table, I was the only one who had seen the main stage Citadel show and the other 3 people were just as entertained. There's only one more show for We're Not Afraid left tonight at 8 p.m. It's a unique and hilarious option for you, I'd encourage you to check it out! 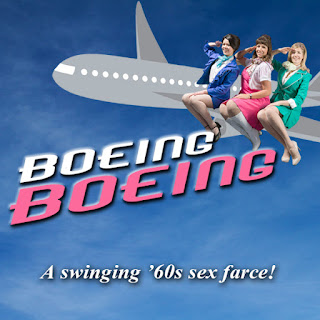 On Wednesday, I caught Opening Night of Boeing Boeing at Walterdale Theatre. I had seen the show a few years at the Mayfield and loved it.  The Walterdale show is similarly hilarious!  It's a great date night or night out for laughs. They embraced the door-slamming farce about a Paris bachelor with three fiancees who are all flight attendants on different schedules.  A storm lands them all in the city at the same time and the hi-jinks entailed to keep his secret are very, very funny.  They cast embraces the physical and over-the-top requirements and there are many gut-busting moments!  Highlights are Carrie Candy as the uber-passionate German and Heather Patton as the beleaguered maid who has to keep the menu straight, but Director Lauren Tamke has created a terrific ensemble with the entire cast. Boeing Boeing runs to February 13th - it would make a terrific date so if you don't have Valentine's plans, this would be perfect!
Posted by Finster at 9:52 AM