What is going on? Ravenscroft (Walterdale) and Les Blues des Oubliées (L'Uni Theatre)

This week I saw two very different plays.  One, Ravenscroft, was a mystery where the truth was slowly unraveled as lies and exaggerations were discarded.  The other, Les Blues des Oubliées, was a french-langueage play with sur-titles. So in both,I had to work hard to figure out what was going on! 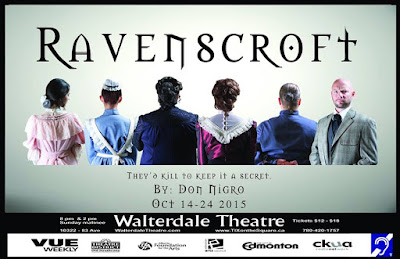 Ravenscroft, currently running at Walterdale Theatre until October 24th, is a who-dun-it with a surprise twist at the end. Inspector Ruffing (Dan Fessenden) interrogates the 5 women of Ravenscroft Manor to try to discover exactly what happened the night the footman was killed.  It's a clever play with juicy characters set in an English Manor in the early 1900s.  I did the props for the show and due to my busy schedule this was first opportunity to see if the worked.  They did! It was great to see the show up on it's feet. The cast does a nice job creating the world and for me it was great to see 5 of the 6 cast members are newcomers to Walterdale. I also liked that they each were clearly defined characters - the beautiful and icy Governess, Marcy (Melanie Bahniuk); the silly and imaginative daughter of the house, Gillian (Sohpie Healey); the not-so-bright and clumsy housemaid, Dolly (Brittany Hinse); the stern and disciplined cook, Mrs. French (Rebecca Bissonnette); and the naughty but imperious Lady of the house, Mrs. Ravenscroft (Catherine Wenschlag). The whole cast works well together, but highlights are the hysterical and saucy Wenschlag and Bissonnette has some absolutely terrific dead-pan moments. They are all supported by a marvelous set (Leland Stelck) and to-die-for costumes (Geri Dittrich).  I was glad to see my few little props measure up.

Last night, I took in my first ever french language play,  Les Blues des Oubliées (The Blue of Forgetting), at L'Uni Theatre.  It was a very cool experience.  Like with Opera or Shakespeare, it took me a few minutes to adjust to reading the surtitles and adapting my brain to deal with the language differently than I do normally, but once I settled in, it was very interesting.  The play is more of a performed poem with dance and song, as a woman recalls her own life and the life of her grandmother.  One theme of the piece explores language as it comments on being a French speaker in Alberta, as well as how that language translates when visiting other French speaking provinces and countries.  That section was very meta for me, being an English speaker in the audience with all those layers of translation.  Other themes were motherhood, childbearing, religion, and culture.  It was non-linear and fragmented and beautifully augmented with projections and dance, as well as sound created by a live musician sitting amidst the audience.  Les Blues des Oubliées runs at La Cite until October 24th.