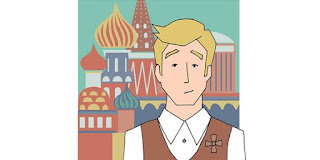 I never know quite what to expect with Teatro la Quindicina.  That's a good thing.  I've learned to go into their shows with a spirit of "let's see what happens" because you never quite know what their show will be about.  The Hot House Prince was certainly that for me.  With references to Three Sisters (all played by the delightful and multi-faceted Kendra O'Connor) the play takes us to Russia during the revolution and a young Prince Dmitri Romanov-Orsk (Luc Tellier) must find a way to survive by fleeing the country.  It's a cautionary tale about entitlement and how that doesn't prepare us for the real world, but it tells it's story in a charming, humour-filled way. What saves Dmitri is his irrepressible hope and willingness to adapt and work hard.  The Hot House Prince left me feeling all warm inside!  The cast is terrific, led by the charming Tellier. I found the cast refreshing and engaging, and highlights for me were Jayce MacKenzie as Dmitri's doomed sister, and Evan Hall and Mari Chartier as the funny-speaking Canadians. Overall though, the cast was a tight ensemble that deftly created the crazy world that Dmitri must negotiate.

The Hot House Prince runs until October 17th at the Backstage Theatre.
Posted by Finster at 4:09 PM