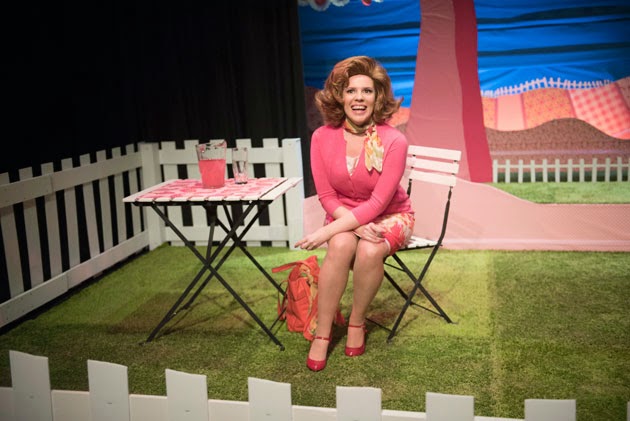 Last night, I was delighted to take in opening night of Northern Light Theatre's The Pink Unicorn. It's a show that has been on my radar for a little while. Northern Light's season this year is exploring gender identity and all it's complexities which is a topic I find fascinating and so relevant in our modern age. The Pink Unicorn, though, is a parent's story and I have often thought about who my children were growing into being and how I would deal with them as they emerged into their own selves separate from my expectations of who they should be. It also starred the wonderful Louise Lambert who has such a vibrant and electric stage presence that you are shocked at how tiny she is when you meet her offstage.  She was the Nurse in the Citadel's Romeo and Juliet last season and the hilarious Dolly in the Citadel's One Man Two Guvnors earlier this season.

In many ways this piece seems very timely, particularly in light of the recent political discussions regarding GSAs in our public schools, but it is the personal story of Trisha, a young single mother of a gender queer identified daughter that resonated with me. Trisha is not a radical.  If anything she is part of the mainstream, conventional Texas community.  She has always done what is correct and right and from her pink cardigan and floral skirt to her perfectly coiffed hair she is the image and spirit of a proper southern lady.  And like most of us, with our teenage children, she is confused by her daughter Jolene as Jolene has grown into someone that Trisha did not expect.  Trisha, however, loves Jolene unconditionally, so she pushes aside her confusion and lack of understanding and does what needs to be done.  It's a wonderful testament to the love of a parent for a child. At the heart of it is the idea that even though we do not understand our children, we still love them and that is what matters. Trisha's love for Jolene pushes her into situations that she never imagined herself, but she serves coffee and cinnamon rolls and smiles despite her apprehension and we wish that we could all have her grace if we were in the same situation.

The show is hysterically funny. In the beautiful white picket backyard with it's pinterest inspired quilted backdrop (Set Designer - Trevor Schmidt),  Lambert channels the entire cast of characters of small town Texas from the pompous school principal, to Trisha's over-bearing mother, to the members of the Lesbian Underground Railroad, to tell us the story of what happened.  We are part of the town as she whispers to us conspiratorially, "I know", as we giggle and laugh at her descriptions. She is honest about her own prejudices and confusion about what is going on and what her daughter is telling her.  "Nothing in my life had prepared me for gender queer." But she is prepared because at the core of it she loves her daughter and that is what is most important, and at the core of it she knows that what is happening is wrong, and at the core of it she knows that to 'smack it out of her' as her mother suggests is not an option nor should it be.

This is a play for every parent and child.  If my son were a couple years older I would take him. In fact, I think everyone with a child 15+ should think about taking them to it. It's for the parent who couldn't understand their child as they grew and the child who didn't realize what their parent was going through.  And I don't just mean parents of gay or gender queer children, it's for every parent because your children are going to be who they are and you can't control that, but you can accept them regardless of what they turn out to be.

I highly recommend.
Posted by Finster at 11:07 AM

I love how honest she is - about not understanding her kid - I totally get that. So many things I wish I understood about what is happening in the head of my kid!