Playing With Fire - Theatre for the theatre-junkie and non-theatre-person alike! 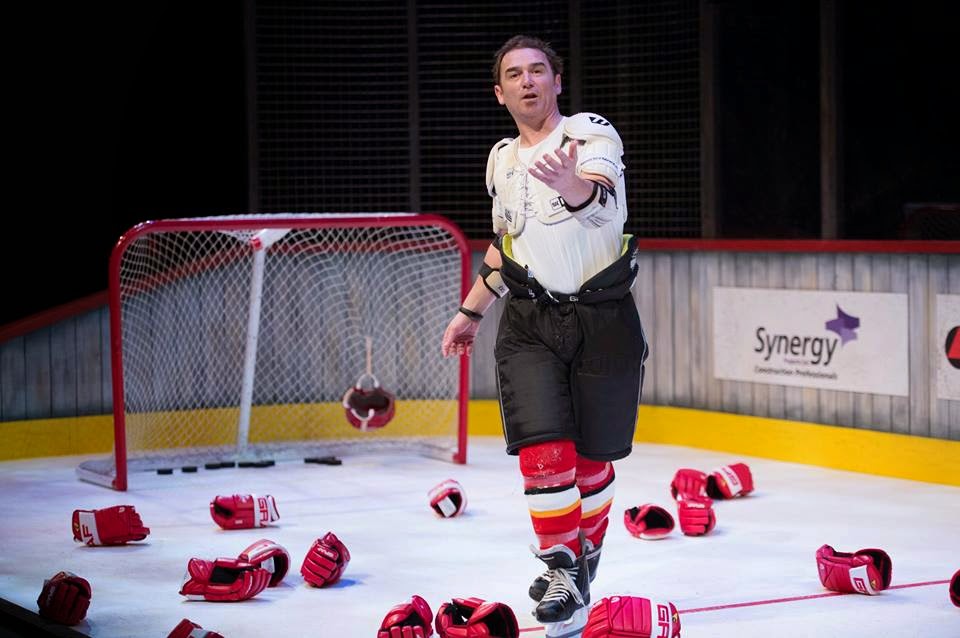 Last Thursday night, after I got all the people into the theatre I got to stay and watch the show, Playing With Fire: The Theo Fleury Story.  This doesn't always happen.  Sometimes I'm just too brain busy to enjoy watching a show and Thursdays are also my youngest's drama class so if my husband can't pick him up I have to.  But, a bad cold kept the wee one home form class and a relatively smooth ticket distribution meant I could go in and enjoy the show.  And I did.

I wasn't sure if it would be my thing.  Although I grew up in a very hockey family I was always the odd one out, preferring the arts to the ice. I was worried it would send me into flashbacks of my childhood spent running around at ice arenas while my brothers played when I'd rather have been somewhere else. But I needn't have feared.  The show was clearly about hockey, but it was more than that.  The story itself is truly engaging.   is Fleury on that synthetic ice surface - charismatic and in-your-face.  A friend of mine called it a master-class in acting and I think that is true.  You never 'see' the actor, only Fleury.  You can tell Smyth knows this story inside and out, as though he lived it himself. The direction and design is also terrific.  This is no solitary actor on a bare stage with a chair - he's skating the whole show, whipping pucks in the nets, fighting and reliving his moments with true action. The soundtrack is rock and roll and wonderfully appropriate for this life. At times you feel you are sitting at the bar listening to the bravado of the superstar, at other times you are witness to the raw vulnerability of the young hockey player in the more horrible of circumstances.  It's surprisingly uplifting considering all he goes through, but at the end you see that it's really a story of survival against the odds, and that makes you happy.
Fleury's journey with it's ups and down reaches both incredible highs and low. It doesn't hide his flaws, it's honest and bare.  Shaun Smyth is a big part of what makes it so compelling.  He

For the hockey fan, I can only imagine it's even more.  For the theatre fan it's more than enough. If you can get to this show, you should go see it. It runs until February 15th.
Posted by Finster at 3:16 PM