Busy Doing... Too Busy to Write!

Sometimes you get yourself so busy seeing things and doing things that you don't have time to write your blog.  That's what the last two weeks have been like for me.

I have caught a couple shows that were well done and great examples of the variety of theatre that you can see in Edmonton.  A week and a half ago I took in Happy Toes by Stewart Lemoine at Teatro La Quindicina.  It was a lovely piece which caught me off guard.  I didn't really know what it was about and my presumption that the happy toes were dancing was totally incorrect.  It was more about friendship, relationships and how our expectation and anticipations affect our personal happiness.  It was a subtle piece, set in familiar places and subtly brought to life by a quintet of actors: Ron Pederson, Jeff Haslam, Julien Arnold, Cathy Derkach and Davina Stewart. It's closed now, but the Varscona is moving into the Shadow Theatre season and there are some great shows on the horizons there! 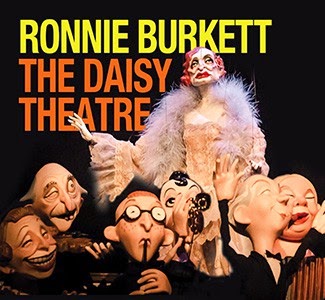 Last week I hit two shows.  The first was Ronnie Burkett and The Daisy Theatre at the Citadel.  I saw this show three times last year, I loved it so much.  It has the wonderful quality of no show being the same as there is an element of improvisation and audience participation. This time I took a Ronnie Burkett newbie and it was wonderful to see her react to his mastery of the marionettes.  After the first 'number' she leaned to me and said, "This is amazing!". It took me back to my first Ronnie show where I was just totally blown away by how you completely get absorbed by the characters on the stage, not the man up above.  It's truly magic! Now, it's on the wrong side of ribald, so be prepared and at this point there are less than 250 seats left for the rest of the run so you're going to want to buy fast to get to see it.  There are great seats left on this Sunday night, so I would hope on the phone and pick those up if you want to catch it. It runs to November 2 and plays in The Club.

The second show I saw last week was Theatre No. 6's Proud by Michael Healey - the fictionalization of what might have happened after the 2011 election if the Conservatives won all the Quebec seats instead of the NDP.  It took liberties, as it was a fictionalization, so although the Prime Minister in question is named Harper, it is very clearly an interpretation.  It is also a comedy so there is a lot of play at hand.  It's not the most perfect script - there's a character in it that you're not quite sure why they are there - and the arc is not really clear, but it was excellently acted by it's cast of four: Brian Dooley, Melissa Thingelstad, Dave Horak and Richard Lee Hsi. What I really liked about it was the explanation of politics - the tactics and the strategies - the speculation on why some things were done. Some of what is in the play (in generalities) I know to be true.  The way a party will only woo the sway-able middle and they will not waste their time on those they know they can never win over - that's totally true. There was also some political theory that literally gave me some 'aha!' moments! It also had one of the funniest sex scenes I have ever seen. Proud closed this past weekend, but I look forward to what Theatre No. 6 will bring next.  It's an exciting mix of artists who have kicked off with a very interesting piece! Tonight I am heading out to catch the first show in the Walterdale season, And Then, The Lights Went Out by Alberta playwright Andy Garland.  It's a play on Film Noir and Detective Fiction.  I had a very small hand in helping to paint the floor but I know a lot of people involved and they are all very talented, so I am looking forward to seeing what they have done with it!
Posted by Finster at 5:26 PM