A Weekend of Song and Dance! City of Angels, West Side Story (AGAIN), and Hair!

This past weekend, we took in not one, nor two, but THREE musicals all within the span of about 27 hours! We also squeezed in a meeting with a contractor and piano lessons so we really maximized our time!

We started on Friday with ELOPE's production of City of Angels.  This is one of my all-time favourite shows to sing and I was very pleased with the production I saw.  It's a show that suggests a huge proscenium with flys and trucks and revolves as it switches from real life to the story of film so I was curious how it would play on the Faculte St. Jean stage. They did marvelous job making it all work. Kudos to the cast for handling the challenging music, particularly the super tight Angel City Four and the stellar leads - Jason Hlus, Trevor J, Monica Roberts, Andrea Graham, Erin Vandermolen-Pater and James Toupin. It was great to see the show on stage again (I haven't seen it in over 20 years) and have it live up to my memory. 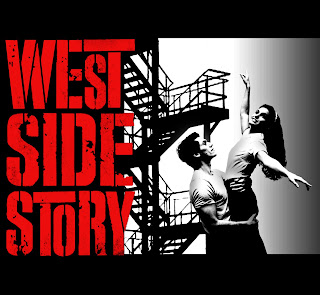 On Saturday afternoon, I finally made my way back for a second viewing of West Side Story at the Citadel.  I had seen it Opening Night and was blown away by it! The Singing! The Dancing! The Momentum! I cried twice and spent a good deal of the show in awe of the talent onstage.  Pamela Gordon as Anita is literally as-good-as-it-gets! Eva Tavares as Maria is both fierce and delicate with a voice that cannot be more perfect.  George Krissa as Tony has a charm that emits like a strobe light from the stage. The whole cast is incredible particularly when they dance.  The direction and choreography is flawless. Choreographer Laura Krewski has worked some true stage magic that makes you think this show should ALWAYS be done on a thrust stage, and director Bob Baker has amped the testosterone levels so that it's terrible end feels tragically inevitable. Going again on Saturday confirmed for me how fabulous the show is.  I cried, again, but in totally different places. And oh, to her Pamela Gordon and Eva Tavares sing together in their heart-breaking duet... just fabulous! Only one week left for this one as it closes on May 22nd.  You can get tickets by calling 780.425.1820 or going online to www.citadeltheatre.com.

Finally, we grabbed a bite to eat and settled in at The Mayfield for a groovy evening with Hair. The show was a lot of fun with great voices delivering the catchy, rambunctious songs of the hippie-love-in show. I am not as familiar with the show, but found the ensemble cast quite entertaining. I really liked the comic character bits, especially those portrayed by Sheldon Elter and Amber Bissonette. The show runs until June 12th at The Mayfield and you can get tickets here.