A Thrilling Opening Night! The Duchess has Set Sail at the PCL! 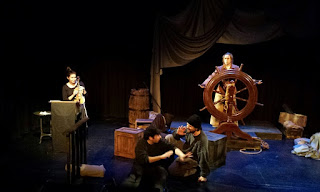 Last Thursday night, to a packed house (only 3 empty seats!) Wind in Her Sails opened and was greeted with a thunderous standing ovation! The ovation was as much for the play and the performance as it was for the playwright, Elizabeth Bowering, who spearheaded the whole project and it was an overwhelming moment for me. I was more nervous than I realized so it was indeed a wonderful feeling to hear the response from the audience and above-all hear that Elizabeth herself was pleased with the show. Unlike other projects, where I have simply been able to interpret the work to my own satisfaction, there was an added layer of expectation that this show not only fulfill my artistic vision, but that the playwright also be happy with it. I do not think the two visions were at odds, but this is a business fraught with insecurity and doubt. The script was an excellent guide - well-written with 4 well-rounded and interesting characters, as well as a charming narrator skilled in story-telling and fiddling! The work is definitely easier when the script is solid. I also enjoyed that despite being set in 1907, the themes of the piece were still very relevant in today's world. 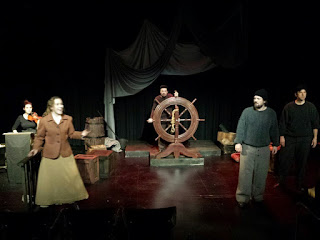 I have been blessed with a terrific cast - Halee Pierog, Kris Loranger, Morgan Smith, Murray Farnell and Larissa Pohoreski - as well as a wonderful creative team - Kirsten Jensen (SM), Erin Foster-O'Riordan (Sound Design), Geri Dittrich (Costume Design), Janine Hodder (Fight Choreographer), and Joan Hawkins (paint). As there were a number of things I was looking out for that fall outside the purvey of directing, it was wonderful to have such hard-working and talented and generous friends to join on to make the whole thing come to fruition.

The show runs until November 21st in the PCL Theatre. It is more than just a show.  It's also a Fundraiser and Awareness project for MSA (Multiple System Atrophy), a rare and so-far incurable disease.  Proceeds from the production go to research into new treatments for MSA and you can also find out more about it and what you can do to help. You can also find out more here: www.windinhersails.com
Posted by Finster at 10:09 AM