A Man of No Importance a moving celebration of community... 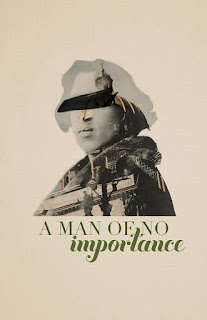 Last night I took in Opening Night of A Man of No Importance at Walterdale Theatre. It's a musical version of the 1994 movie starring Albert Finney, about a bus conductor Alfie (played with subtley and charm by Morgan Smith) in Dublin in the 1960s who finds a happy life leading a local amateur theatrical troupe in the local church and living with his older sister who is just waiting for him to get married.  He is deeply closeted as it is a time in the very Catholic Ireland when homosexuality is both a crime and a sin. When he decides to produce Salome by Oscar Wilde the resulting scandal turns his well-ordered life upside-down and he decides to confront the truth of who he is.

It's a wonderful piece of theatre.  It celebrates and it mourns. It celebrates the community of community theatre, really of any theatre collaboration.  All the members of the troupe come together to be something more than what their lives are.  As directed by Lauren Boyd, this cast does a lovely job of staying in the world.  The staging is fluid and dynamic and engaging, drawing us into these ordinary people's lives. We recognize ourselves and others on the stage and we also see the passion and love for creating art. It fits perfectly upon Walterdale's stage and you believe that you are watching this encapsulated world.  Joan Hawkin's simple but ingenious set does part of that, but so does Boyd's direction and the ensemble's commitment to the world.  There are imperfections, but those are owned as they would be by the actual characters of that 1964 Dublin.

The play also has sad and touching moments, without over-dramatizing we see the struggle for Alfie as he hides who he is and who he loves, finding consolation in his love of theatre. When that is taken from him and he sees so many other people in his world sinning without repercussion, and he decides to be he who truly is, the results are heartbreaking. A great deal of that goes to Smith's delicate delivery of Alfie and his anguish.  So many wonderful moments communicated internally subtly and honestly.

Smith is supported by a thoughtful and dedicated ensemble. The songs, though not particularly memorable, are well sung and tuneful, and if I had one criticism it was that volume of some of the solos was a little low and the use of mics or some muffling of the orchestra in places might help with that. My favorite was the ensemble piece,Art, but though that song says "in a week and a half, it'll be art," I beg to differ.  This show is Art right now.

Labels: A Man Of No Importance, Morgan Smith, walterdale