Win-Win with Winners and Losers and Over the Edge with 4 Play!

Despite a wicked cold, I made it out to three theatrical events this weekend.  First up on Thursday night, I took in Winners and Losers in The Club at the Citadel. It was an edgy night. The first hour you are laughing, hard, at the competitive banter of Marcus Youssef and James Long as they play their game winners and losers. They are quick and sharp, smart and funny, and the line blurs between when they are improvising and when they are on-script. Then it takes a turn and you're not laughing anymore, or if you are, it's that nervous laughter.  This is the show for people who like that edge.  For people who like to see what happens when you blur the line between acting and reality and maybe go too far.  It was fascinating to be in the room immediately after because of the discussions that arose as it is certainly the kind of show you talk about. Winners and Losers runs until April 18th at the Citadel. 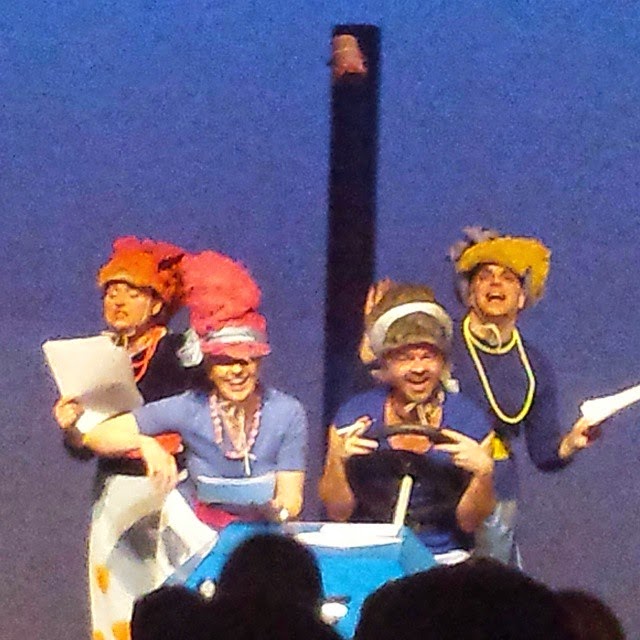 Then, because I somehow don't think that resting when you are sick applies to me, I went out with the lovely Catharooni on Friday night to take in Catalyst Theatre's annual fundraiser, Over the Edge With 4 Play.  If you don't know what that is, here's a simple description: In the morning on Friday, a first line of dialogue and a prop are pulled from a hat (these have been submitted by many random people via email). That line and that prop is given to 4 playwrights who have about 3 hours to write a play for 4 actors. Then that script is given to 4 directors and 4 design teams and they rehearse and design the shows for display that evening.  Each play gets 1 hour of 'rehearsal' with the 4 actors (who perform in all 4 plays).  So, when we arrived at 9:30 pm, we were treated to 4 new plays which indulged deliciously in the ridiculous!  Afterwards we got to vote for the best play, best director, best design and best actor.  It was so much fun! The plays were all so different and funny in their own right and with casts of Trevor Schmidt, Stephanie Wolfe, Mathew Hulshof and April Banigan they were even more!  I can't believe I have never gone before and I plan to back for more (and maybe someday I can participate in some capacity!).  A truly hilarious evening and all for a good cause. Happy to announce that Catalyst met their fundraising goal!

The third theatrical event was my return for the closing of Arcadia.  I was glad to get back to see it again. It know it wasn't for everyone, but that's the beauty of art, isn't it? It means different things to different people, so the audience (the viewer) is part of it.
Posted by Finster at 6:44 PM

Labels: Arcadia, Catalyst, Over the Edge with 4 Play, The Citadel, Winners and Losers