#yegbookclub Returns in January 2015 with a Mystery!!

We had a great time chatting with author Wendy McGrath about her novel Santa Rosa on November 17th.  You can follow the discussion with this storify. It was an interesting conversation and we were once again treated to having the author participate in the live discussion! We also talked about the progression of the story started in Santa Rosa and continued into North East and beyond.  I personally found that fascinating - the 'where the story will go and why'. 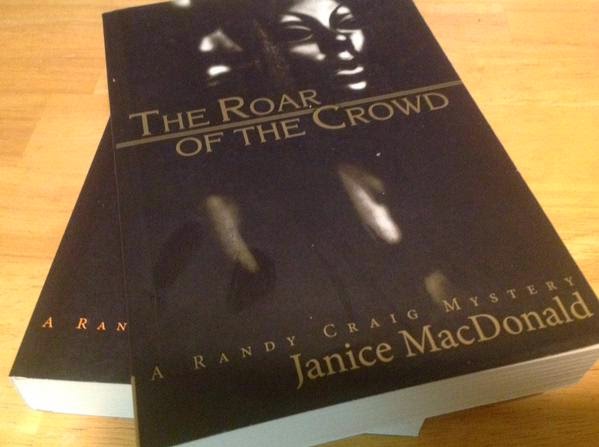 #yegbookclub will be returning in January with a book that caught my eye this summer at the Free Will Shakespeare Festival.  As most people know I am neck deep into the theatre community of Edmonton and this time around I get to combine reading about Edmonton with theatre in Edmonton. We will also be tackling our first mystery novel. We will be doing Janice MacDonald's Roar of the Crowd.  It's set in and around the Edmonton theatre scene, as well as the University fo Alberta English and Drama departments.  As someone who has spent time in all those 'scenes', I am looking forward to reading and recognizing (I hear that some people I know get mentioned in the book - very cool!). I was leery about starting a mystery series partway through, but have been reassured that it won't be a problem to start with this one.  I've also bought an earlier book in the series to see if that holds up!

When: January 19th at 7:00 - 8:00 p.m.
Where: Anywhere you can get online to twitter
How: Use the tags #yegbookclub and #roarofthecrowd to follow the discussion. You can also tag my twitter handle @smeep22003 and I will retweet any related comments.

I hope to see you ll there!

I thought I would get this out there now so you could all get copies for people for Christmas so they can join in!
Posted by Finster at 10:33 AM

Hi Kristen, I wasn't sure how to contact you so I thought I would leave a comment on your blog. Michelle Palansky here, marketing manager at Turnstone Press. We are super stoked that you are featuring Janice MacDonald in your upcoming book club and would love to help out in anyway we can. We do offer discounts to bookclubs and perhaps there is something more interactive we could offer...let me know how we can help. marketing@turnstonepress.com