The Woman Behind the Man... Testament of Mary at Northern Light Theatre... 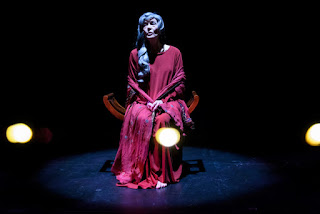 Saw Testament of Mary at Northern Light Theatre last night. It is a strikingly beautiful play to watch, particularly because of how Trevor Schmidt's Set and Costumes are lit by Adam Tsuyoshi Turnbull's lighting. This is not the cool, mild Mary portrayed in the New Testament but one that simmers beneath the surface so perhaps it is also appropriate that Holly Turner, who plays Mary fiercely and intelligently, is dressed in warm reds instead of the cool blues we often associate with the Virgin Mother. It's a fascinating imagining of Mary's personal, emotional, resistance to what happened to her son (who she refuses to name) and to how she feels used in the narrative that is being constructed around his miracles, death and resurrection.

On reflection this morning, it has me thinking about how we receive and consume news in our world. So much of the stories we receive are crafted by media and conflicting details are suppressed and shaped into something palatable and click-worthy. If you've read the Da Vinci Code you are probably aware that there are many more than just 4 gospels (Matthew, Mark, Luke and John) and that those four were selected for the new testament to tell a particular and consistent story. I wonder what the story of Jesus would look like if we read the other testimonials as well. And yes, I know that this is a fictionalized 'what if' story... but I can imagine that a mother who lost her son in the way that Mary did would not be so inclined to rejoice.

Testament of Mary runs to November 4th at the PCL Theatre. Click here for tickets.

Photo Credit: Holly Turner in The Testament of Mary, Northern Light Theatre. Photo by Ian Jackson.
Posted by Finster at 11:34 AM