Cafe Daughter, A Christmas Carol, The Sultans of String and She Loves Me... all in a week's work!

Anyone who claims there is nothing to do in Edmonton needs to have their head examined! When I looked back at the week and realized that I saw 4+1 varied performances I was a little surprised myself! 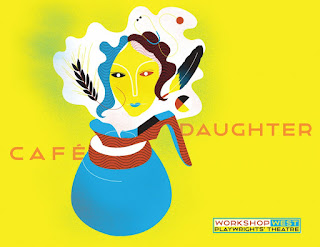 Last night I took in Workshop West Playwright's Theatre/Alberta Aboriginal Performing Arts production of Café Daughter by Kenneth T. Williams. A entirely enjoyable evening of theatre due primarily to the phenomenal skills of Tiffany Ayalik as the title character, Yvette Wong.  The story was inspired by the life of Dr. Senator Lillian Eva (Quan) Dyck who was the daughter of a Cree mother and Chinese father and who was raised to hide her aboriginal roots. Ayalik does a tremendous job giving life to Yvette and the myriad of characters that populate her life, shifting smoothly between each one.  It is a story of struggling with identity and coming to terms with embracing that which has been hidden. Kudos must also be given to T. Erin Gruber for the stunning set, evocative of a Saskatchewan prairie with intriguing layers and puzzle pieces. The script could use a little more complexity and perhaps seek a little more universality, but it's a fascinating story especially for it's being rooted in a true story and it is elegantly told in this production. The show runs at the Backstage Theatre until December 6th.  It's their 6-pack show and the space is small so I encourage you to buy in advance as they have had Sold Out houses and this will likely continue. 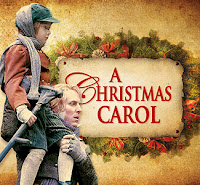 Friday night was the Invited Dress Rehearsal for A Christmas Carol at the Citadel. For me, the show now signals the kick-off to my holiday season. Before the Citadel production I was never a fan of the Dickens' story, despite it actually being the first play I was ever in (grade 7 - I was the fiddler at the Fezziwig party and a Cratchit child). But there is something truly magical about the production that literally makes me cry every single time I see it. There are a number of new actors this year in key roles.  I have to say, it was like seeing the show anew. It's the same show but with a slightly different energy and that made it so incredibly engaging. Previews started last night and the show runs until December 23rd. I know first hand that tickets are moving incredibly fast.  If you plan to see it, you should get on that sooner rather than later.

Wednesday night, Mark and I took in She Loves Me presented by Foote in the Door Productions. The show was a little dated, but lots of fun as presented by this enthusiastic cast.  It's the inspiration for You've Got Mail and followed a traditional Rom-Com formula. Boy meets girl, they rub each other the wrong way, turns out they are also anonomously corresponding and in love on paper, boy discovers this, they discover this and all is well! Stand-outs for me were Christina O'Dell as the girl who always picks the wrong guy but meets the right one in a library and Dustin Berube as the best friend who just doesn't want to get involved in all the hi-jinks. I also loved the restaurant scene and the Christmas shopping scene! 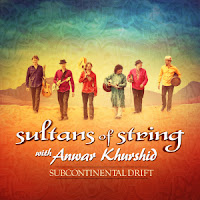 Last Sunday, we took a drive all the way out to the Maclab Centre for Performing Arts in Leduc to see the Sultans of String. My brother-in-laws' brother is in this Toronto-based band and we have been trying to catch them when they've come though Alberta in the past and this was the first time it worked with our schedule. We had a terrific time. The venue was perfect for this kind of concert and the band was exceptional. The focus is on strings - guitar, violin, bass - along with a percussionist.  They also had a guest performer on Cello.  The music itself pulled from a variety of cultures - Celtic, middle-eastern, new music, rock and roll, jazz and some terrific sounds reminiscent of whale song. There's also a real sense of humour to the music and they certainly know how to entertain a crowd!

Last Saturday was closing night of Wind in Her Sails.  It was so wonderful to see the show again after being away. The show was slightly over-sold and they had to squeeze in a few more chairs to accommodate everyone. Very exciting! Afterwards, it was wonderful to go out and celebrate with the cast and team and raise a glass to Mavis and her adventure!  Just because the show is over, doesn't mean you can't still support MSA Research.  Check out the Wind in Her Sails website for information on how you can still donate!
Posted by Finster at 12:01 PM

Labels: A Christmas Carol, Cafe Daughter, She Loves Me, Sultans of String, The Citadel, Wind in Her Sails, Workshop West