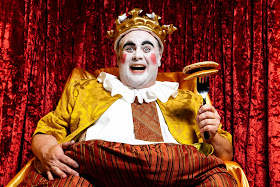 I took in the ridiculous and excessive Fatboy by John Clancy (not to be confused with the author of The Hunt For Red October) directed with controlled abandon by Dave Horak and presented at Theatre Network by the Edmonton Actor's Theatre. This is not a show for the faint of heart. It's rude, and bawling and lusty and violent and irreverent and full of more curses per minute than any of show I have seen in my life. I will admit, at first I wasn't sure what I was watching.  The show starts with a belligerent bang of a shouting match between Fatboy (Frederick Zbryski) and his extremely buxom wife, Fudgie (Melissa Thingelstad). It's over the top - not in a Broadway musical kind of way - but in a nightmarish, twisted circus of lechery and violence.  Once acclimatized to the phenomenal patter of cursing interspersed with cries for Sausages!! and Pancakes!! I just held on and went for the ride. They are joined by a multitude of characters played brilliantly by Ian Leung, Tim Cooper and Mathew Hulshof.  The entire cast is incredible.  This kind of piece only succeeds with 100% commitment to the choices and, boy, do they commit.  There were so many times while watching that I marveled at how good they all were.  The world was so complete and there was never a glimpse of the real person beneath the white pancake make-up on their faces. It was as though they had been doing this show for years.  Zbryski's patter is both frightening and hilarious. Thingelstad is marvellously brash.  It's all complimented by a delightfully tilted and distressed set designed by Scott Peters and costumes that are whimsical and macabre designed by Melissa Cuerrier.

The tale is a twisted reinterpretation of the scandalous Ubu Roi (1897) by Alfred Jarry - famous for opening and closing on the same night and causing a riot in the theatre. A comment on the excess of our world, and on the inherent selfishness of humankind, particularly those in power.  It's a little mind-blowing at the end.  I am personally not quite as cynical as the play is in it's final moments.  I can't see the world quite in the way that is suggested by the wrap up.  What can I say? I'm an idealist. But after the roller coaster of violence and ridiculousness is over, the closing comments are what you'll be talking about with your friends for hours afterwards. Depending on where you sit on the spectrum of political and social belief, I think you will come away from this with a completely different reaction. It's really whether you can see Fatboy in Kim Jong Il or perhaps  Rob Ford or your Next-door-Neighbors or even yourself that will tell just how you see the world.

I'd say this is a must-see for those that can handle the language and violence (the violence is all very comical, but for the faint of heart...).  If you are an Edmonton theatre aficionado you simply
have no excuse.  If you are a drama student at either of the two Universities I would be appalled if you missed it. It's a masterclass. Give yourself permission to laugh, and buckle-up for the ride!